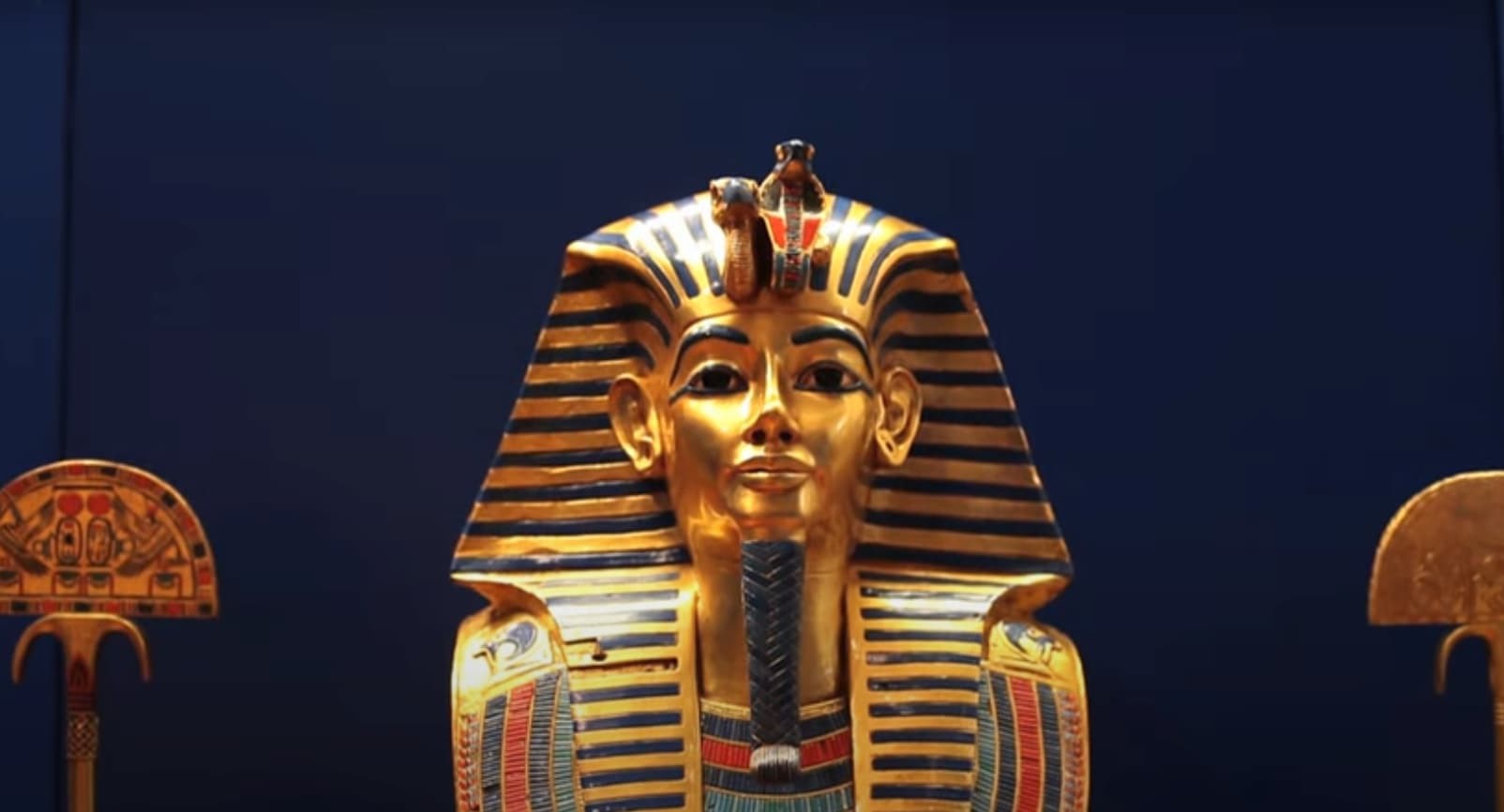 Treasures and Jewelry of King Tutankhamun

Treasures and Jewelry of King Tutankhamun

Tutankhamun was born around 1342 BC and ruled Ancient Egypt for around ten years before dying at the age of about 19. His reign as pharaoh was brief;

however, the discovery of the Boy King’s complete tomb (Treasures and Jewelry of King Tutankhamun) in 1922 cemented his place in Egyptian history.

Howard Carter, an English archaeologist; unexpectedly found Tutankhamun’s tomb in the Valley of the Kings after years of excavating; unveiling halls filled with “beautiful treasures” (Treasures and Jewelry of King Tutankhamun)to the world.

Tutankhamun’s tomb was brimming with priceless artefacts to aid the Pharaoh on his eternal trip. The scarab beetle on this piece of jewelry is composed of lapis lazuli, a semi-precious stone admired for its deep blue color; which made it popular in Ancient Egyptian jewelry. Also, the scarab was revered; and Khepri, the scarab-faced deity of the rising Sun and resurrection; was worshipped.

Sandals made of solid gold

These sandals, made of solid gold for burial use; would have been put on the feet of the dead Pharaoh before he was covered in strips of linen. Also, they look like 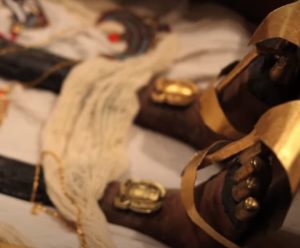 the leather and plant sandals Tutankhamun wore in life. One of the most significant roles in Ancient Egyptian society was that of the pharaoh’s sandal-bearer. They would not only carry a pharaoh’s footwear; but also wash the regal feet.

The ancient Egyptians thought that the body will be needed in the afterlife; thus they took great care to maintain it after death. “Stalls like these were used on fingers and toes to keep the contour of the deceased’s body – especially for pharaohs; who were considered to become celestial after death.  “Gold was especially valuable since, like the Ancient Egyptian deities; it does not rust or change. It continues on indefinitely.”

In Ancient Egypt, the crook and flail were the most important symbols of royal power; with the shepherd’s crook representing monarchy , in addition, the flail symbolizing land fertility. This particular version was discovered within Tutankhamun’s mummy’s wrappings. Also, the crook and flail feature silver centers; while the crossed hands are constructed of gold with colored glass. 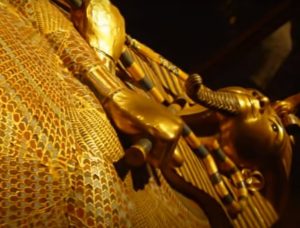 Pectorals, or elaborate items of jewelry; were worn across the chest and were akin to huge necklaces. The god Horus is depicted here as a gold falcon clutching the sign for immortality (shen) in his claws. Horus was supposed to be the pharaohs’ creator and guardian.

In addition to food, clothing, and weaponry; the Boy King’s tomb contained many games; including this Senet board, for enjoyment in the afterlife. Senet was a popular game in Ancient Egypt; and it was played by people from all walks of life. The game was normally played by two individuals; however figures on the wall of Pharaoh Rameses II’s tomb show Nefertari – wife of Rameses II – fighting against an invisible foe in order to pass into the afterlife.

King of the hunt

The boomerang was an object that would seem out of place in an Ancient Egyptian tomb. “They had been utilized for hundreds of years before Tutankhamun; at least since the Old Kingdom.” The most famous illustration of its employment was a boomerang tossed from a boat in the Delta marshlands to catch birds.”

This wooden jar is thought to have carried a mummified duck; while others were thought to have held beef and goat portions of meat. In Tutankhamun’s tomb, 48 of these mummies’ were discovered. According to the author; “meat slices were rolled in linen and put inside these jars to maintain the Pharaoh alive throughout his journey to the underworld.” They’ve even been made to look like the slices of meat that are within.

A sistrum is a hand-held musical instrument that stands about 20 inches tall and may have been utilized during Tutankhamun’s burial ceremonies.

“One of two sistrums discovered in the antechamber; above one of the Pharaoh’s burial beds; will be on display.”

Sistrums were typically played by women; thus it’s possible that Ankhesenamun, Tutankhamun’s spouse and queen; was carrying this device during his husband’s funeral.

“The sistrum was much more than just a musical instrument; it was believed to be Hathor’s closet musical instrument. Hathor was the pharaohs’ guardian goddess; with a temple in Dendera where singers performed sistrums; which were said to impart vitality to the body with their rattling sound.” 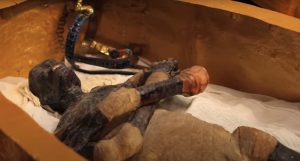 The internal organs of the body were removed as part of the mummification procedure. These were kept in canopic jars, which had beautiful stoppers composed of calcite; like this one.

The heart was the one organ that was never removed; and it was thought to be weighed against the Feather of Ma’at – the symbol of justice and truth – in the afterlife. The deity Osiris was said to judge whether; the departed had done good on Earth and hence deserved to live forever in the hereafter.

One of eight wooden shields discovered in the tomb’s annexe depicts Tutanhamun as a sphinx trampling on his foes. The sphinx is topped by a falcon; which is a 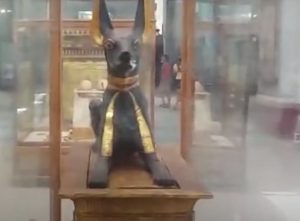 representation of the fighting god Montu. The openwork of the wood shows that this shield was designed for ceremonial rather than fighting purposes. The shield represents the Pharaoh; as a powerful king who protects Egypt from chaos by driving out its adversaries.

The hand of the king

“The majority of the items discovered in the tomb are ceremonial or were intended for use by the Pharaoh in the afterlife.” These linen gloves were most likely worn by Tutankhamun during the winter months; while he was at Memphis [Ancient Egypt’s capital]; or when he was riding his royal chariot.”