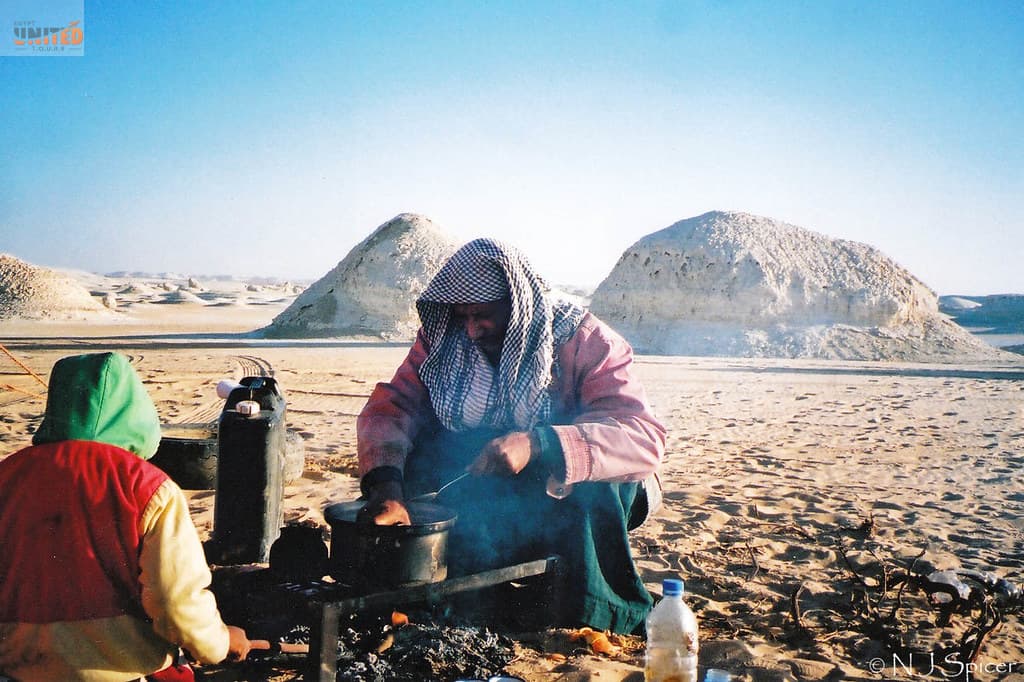 Egypt United Tours › White Desert
Contents [ Show/Hide ] ▼ Show
1 White Desert
1.1 White Desert Protectorate
1.2 More Info to know about the White Desert
1.3 Facts and Studies
1.4 Follow Your Steps in This large and old specimen of Acacia Nilotica Till finding that the Cretaceous period surrounding you.
1.5 History
1.6 The Gara Cave
1.7 How Will Be Your Night In The White Desert? 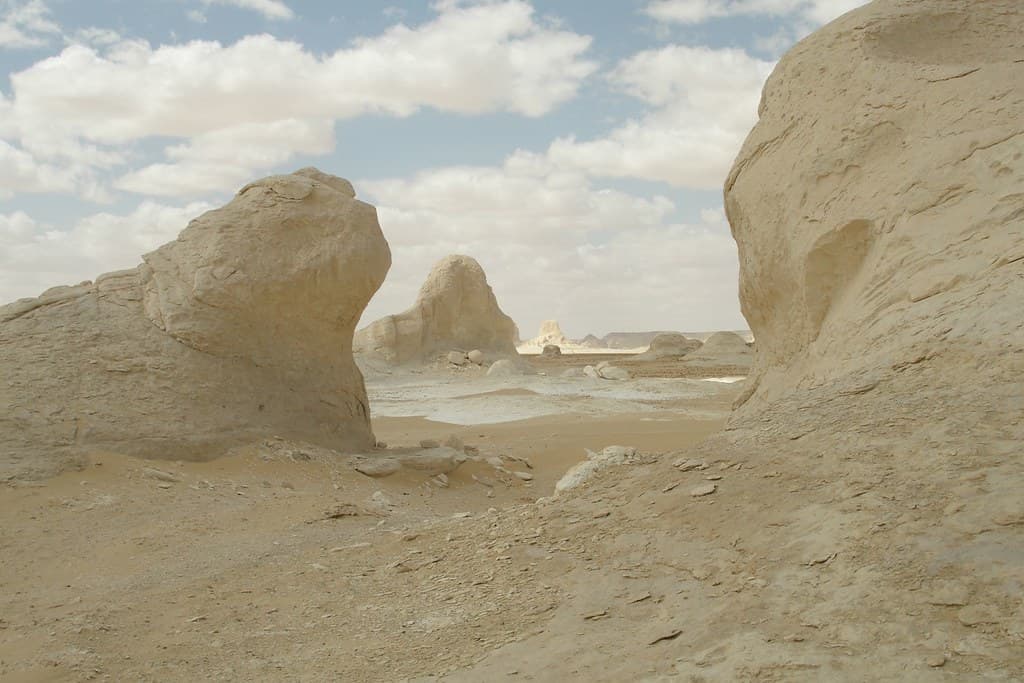 It is as though nature has prepared for you an art exhibition; no other spot in the whole world will transport you to this charming world to walk on a vast area of white sand, touching with your feet this landscape that looks like glass, to feel you as if you are inside one of the magical animations or you have completely gone out of the earth planet and entered a charm of another planet, crossing through the rarest geological formations in this charming crystal landscape to meet on your way unique flora and fauna world including the Slender-horned Gazelle, Gazella Leptoceros. In fact, it is the allure of the White desert in Egypt. 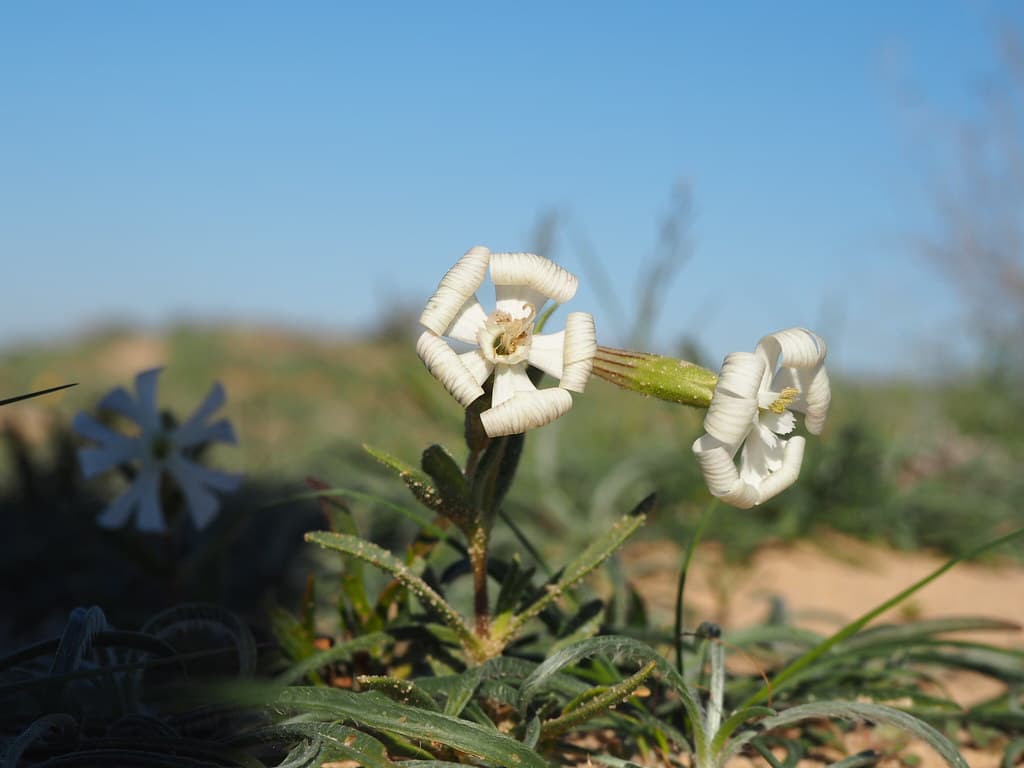 You will feel when wandering the White desert Protectorate in Egypt that you indulge in a world of imagination, no matter how much you imagine to travel to an imaginary place that will not reach this point of astonishment, finding that missionary rocks sculpted by nature from 80 million years ago to take the form of monoliths and mushrooms, ice cream cones, tents,  hen and another rock that resembles a camel, and there are shapes of rocks in the form of a horse and a falcon, in addition to the sand known as African rocks because it takes the shape of the continent of Africa as if it were a drawn map accurately. 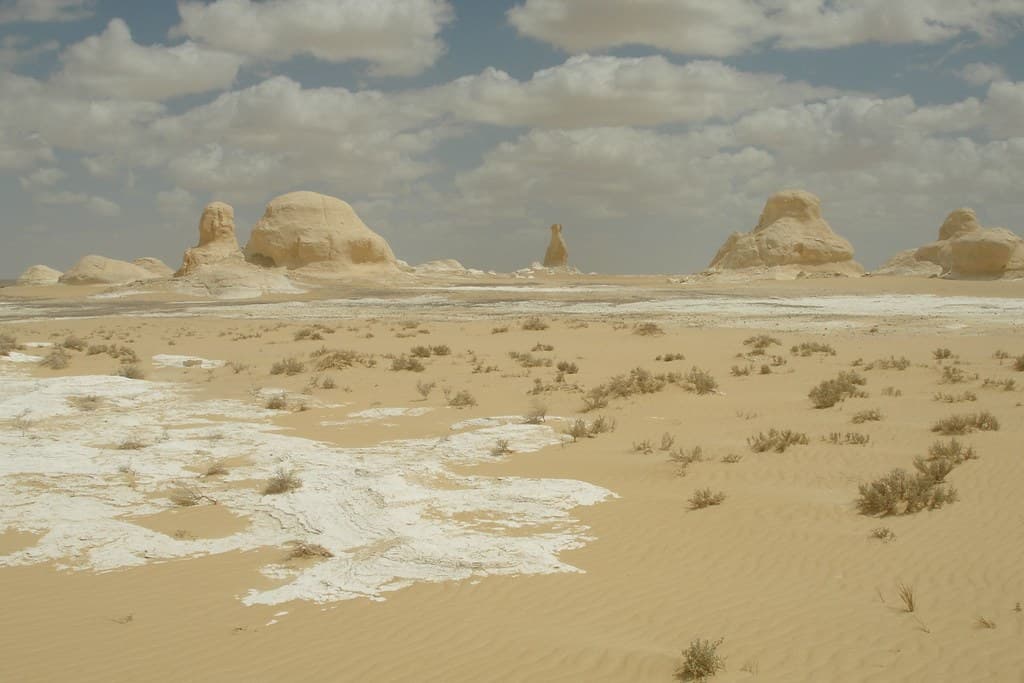 White desert sculptural formations and their calcifications are considered one of the unique types called karst, which is a very ancient geological phenomenon. Over time, these formations formed caves over them, which in turn were transformed by erosion factors into high crystals of calcite ore in various forms such as mushrooms and other forms; it is a special area called the Mushroom area that you will meet while you walk through the dried ocean.

More Info to know about the White Desert

A world of drifting sand and ephemeral riches and long history through time can be discovered through this natural landscape. The fossils scattered on its white land are a clear indication of climate change in that region throughout history, and its rocks date back to the Cretaceous period and are formed as a result of the inundation of the Tethys Sea that area. 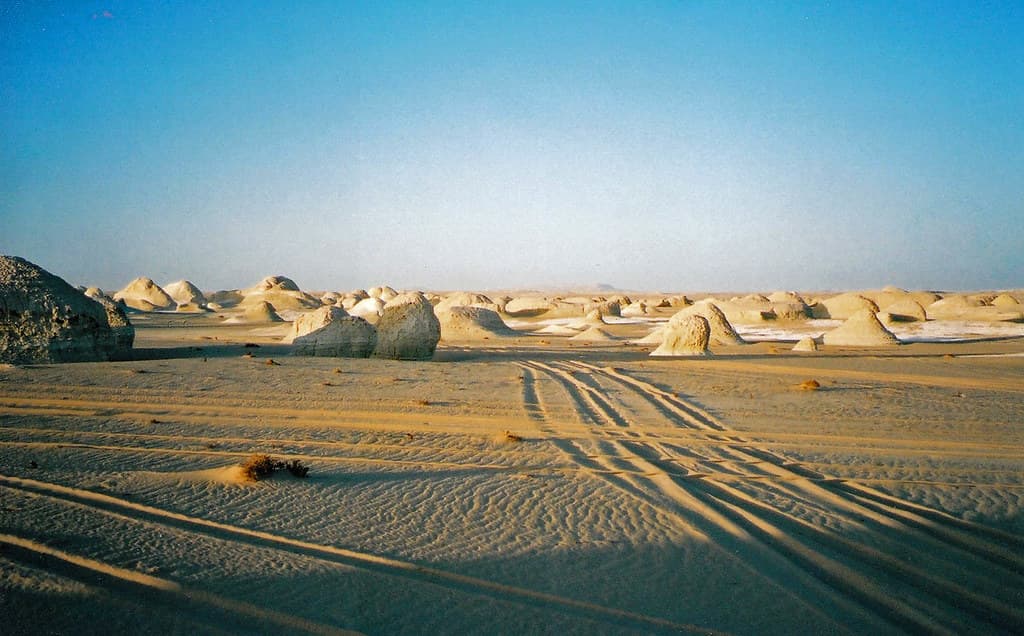 In fact, while you are on your way, you will find clear evidence that shows that this white desert would have been a savannah with lush green areas and lakes full of fish. The place seems to have been an ideal hunting ground for pre-history.

While you are in the heart of this natural museum of rock chalk seeing missionary rocks sculpted by nature and the antiquities and tools that can travel you back to prehistory times, as well as the remains of tombs, rare caves, and ancient mummies, you can live the amazement of an incredible sight; it is able to forget you ever seen in your life so it will overwhelm everyone with its magic, as you will be surrounded by dramatically view while the golden rise of the sun reflect on this crystal monuments to walk on a land shines with orange sunlight during the sunset and the sunshine. 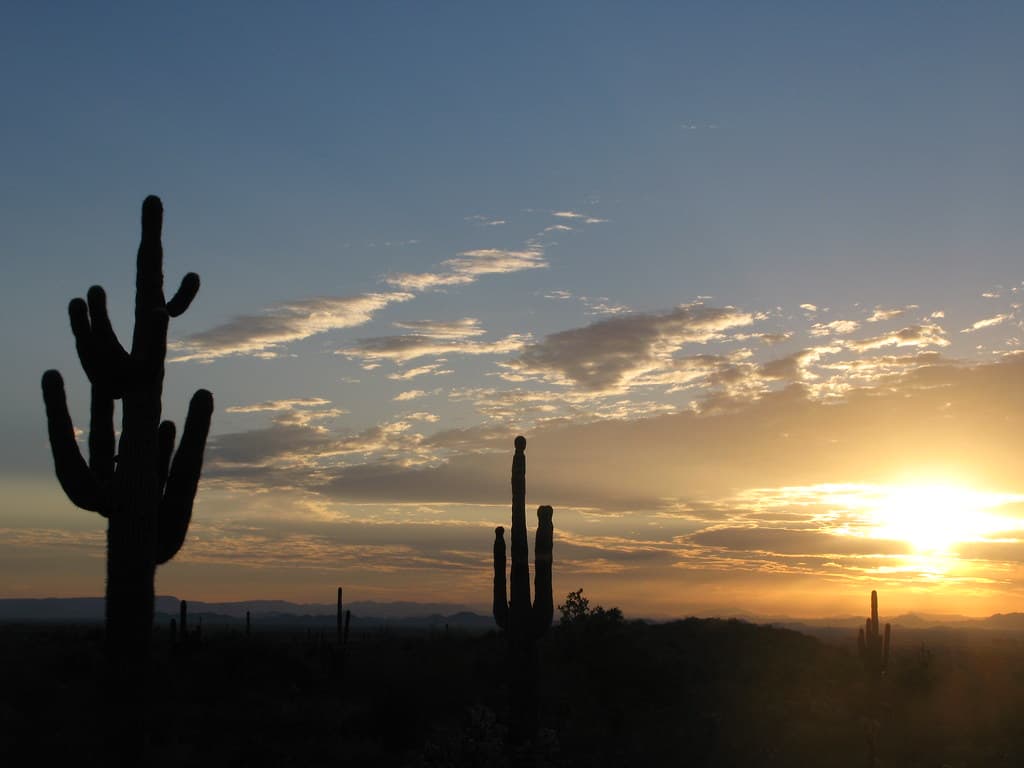 That is how White desert Egypt is the world where imagination embraces reality. It seems to you that nature harmonizes in slow dances amid the tranquility of nature to create that contrasting scene between the hot atmosphere and the cold, icy image. 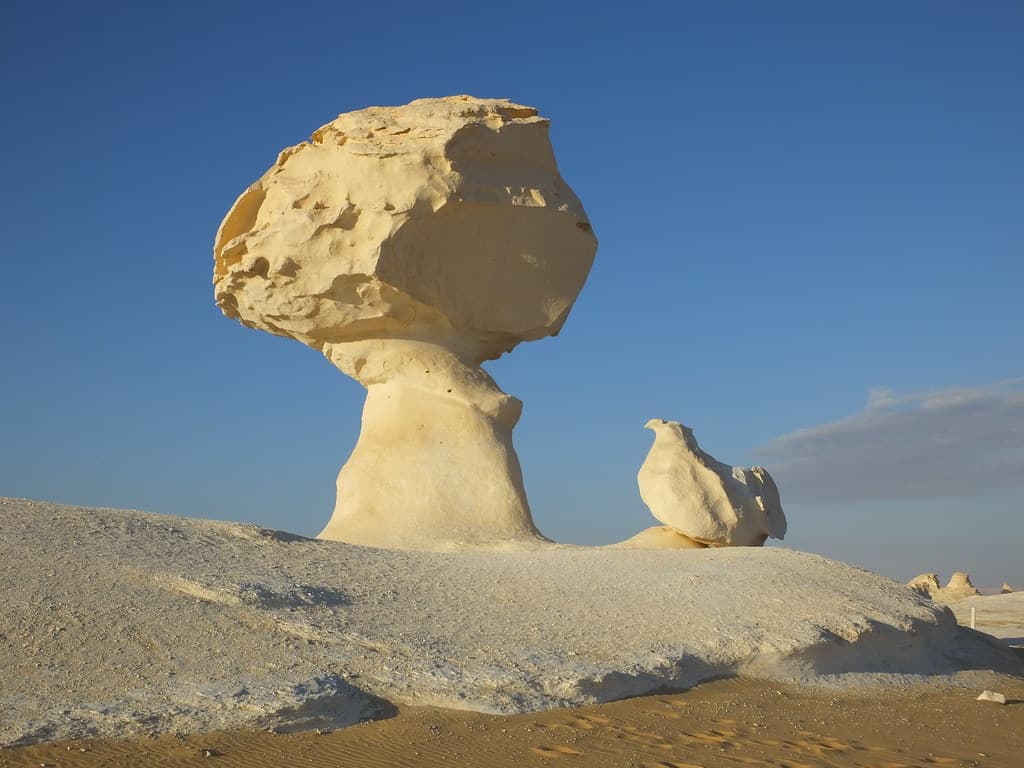 Forty-five kilometers north of Farafra Oasis, 570 kilometers from Cairo, with an area of ​​3010 square kilometers, you will be in the bosom of all this imagination to walk along with an infinite array of shapes and colors, tiny calcium carbonate crystals, and iron pyrite nodules, plus playa.

Follow Your Steps in This large and old specimen of Acacia Nilotica Till finding that the Cretaceous period surrounding you. 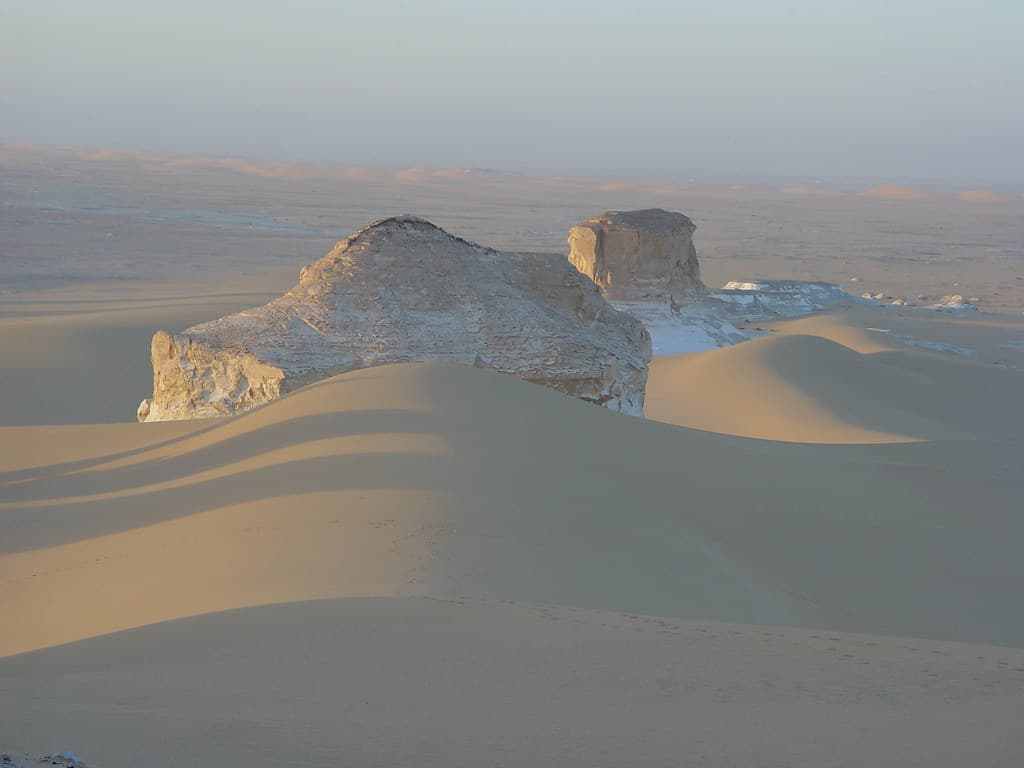 In the past, the white desert was abundant with people, as inscriptions and decorations that adorn the walls of white cave will attract you to come as evidence of that civilization that prevailed in this region 10 thousand years ago. These inscriptions are animal motifs that reflect the traditions of Nubian rock art.

Close to this cave, you will find a plateau on which there are structures whose owners have lost their stories from memory with the passage of time, but in any case, refer to those fleeting periods.

Pre-history era had left its inscriptions at the entrance to the Gara cave, which is one of the rarest caves in the world, rich in sediments. The Gara cave is a depression under the surface of the earth, topped by a high basement, and its entrance is a small hole under the mound, and it is connected by a narrow, sloping corridor filled with sand. Dry desert in the desert over millions of years, and it contrasts with all the caves of the region in its formations and the form of sediments that look like fire falls, and the heights of sedimentary formations, according to Rolfs’s description, reach three or four feet. 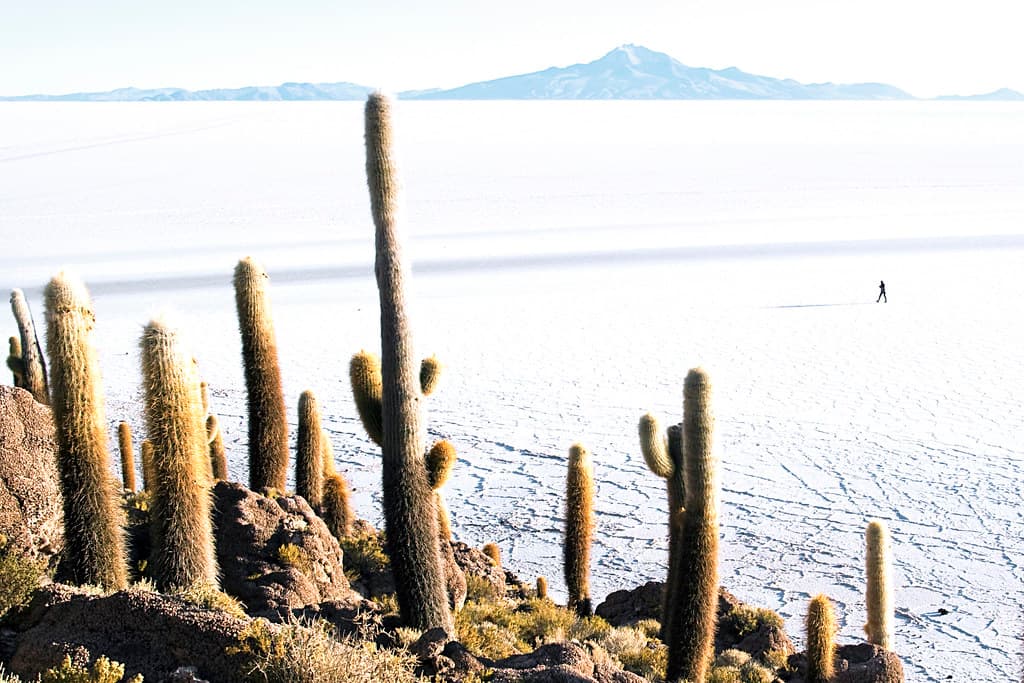 White Desert by Dimitry B

While you walk through these fantastic artifacts, remember that the natural formations you meet are shaped in the prehuman eras, to be a witness of the earth from its first creation to walk through the Cretaceous period through the beginning of the creation of man and how nature was at that time up to the pre-historic era until the era of history while you are in complete calm waiting for another surprise that the night brings to you in that rarest region in the world, the white desert.

How Will Be Your Night In The White Desert? 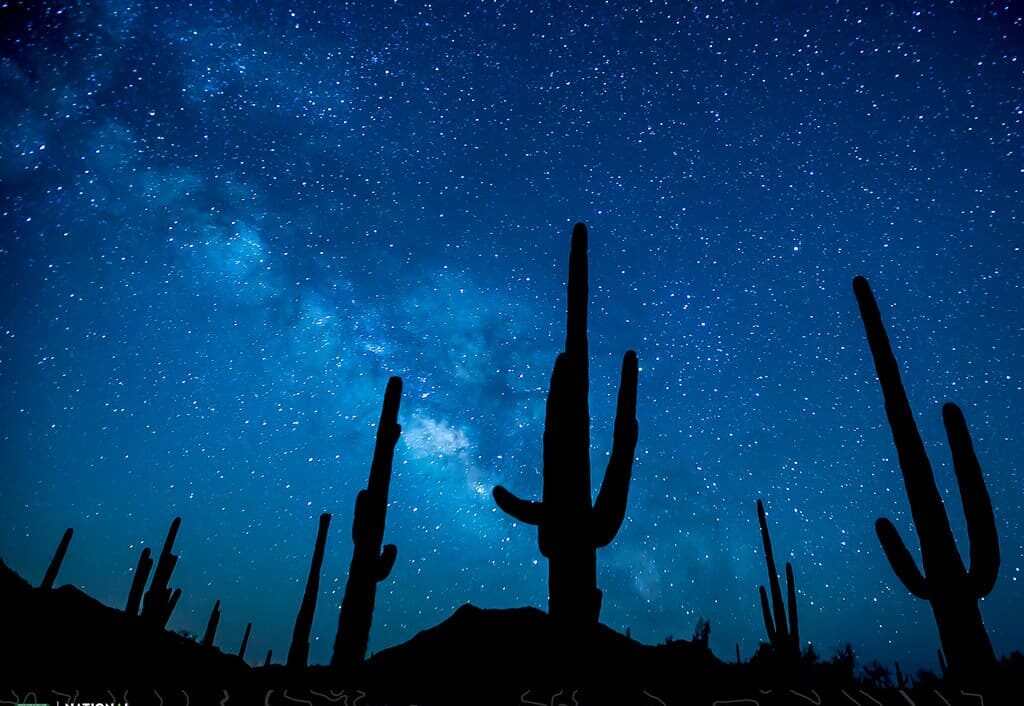 While this magic white sand beneath you, prominent stars will illuminate your night in an imaginary form, as if nature is celebrating your magical night to raise your eyes to the sky, and you will find a uniquely clear view that shows the beauty of the Milky Way.

At nightfall, the Bedouins prepare a traditional dinner for visitors. The smell of food often attracts the cute fennec foxes, which sometimes relies on leftovers from visitors’ food as part of their diet.

Which desert is White Desert?

Where is the White Desert?

Why is the White Desert Special?

In fact, the combination of the white sand with the sunshine makes the White Desert such a unique spot, in addition to being a very safe region where there are no harmful animals," said the author. "It also features enormous chalk cliffs and really interesting sand formations arising from sandstorms in the area.

Why is it called the White Desert?

White Desert (known as Sahara el Beyda, with the word sahara meaning a desert). The Egyptian White Desert is situated 45 kilometres (28 miles) north of the town of Farafra. Massive chalk rock formations that have been formed as a result of local sandstorms give the desert its white cream tint and this is the reason why it was given this name.

How was the White Desert created?

In the distant past, the desert was a seabed. When the ocean receded and a plateau broke, sedimentary rock layers were revealed. The White Desert's distinctive features and allure are a result of some stone formations that withstood the passage of time.