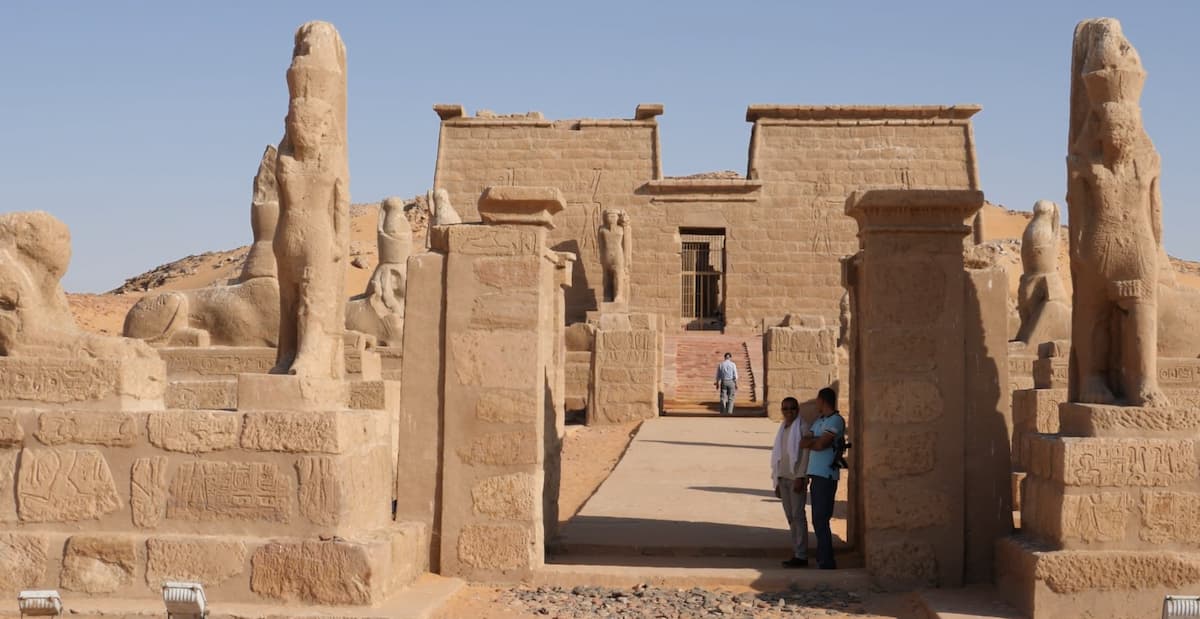 Wadi El Sebua, which means ‘Valley of the Lions’ in Arabic; ,is situated 150 kilometers south of Aswan, near Lake Nasser. Also, contains two fascinating New Kingdom Egyptian temples; one of which was built by Ramesses II and is now recognized as the Temple of Wadi al-Seboua (Wadi el-Sebua); However, it was initially named as the “House-of-Amun,” was salvaged (in 1964) and relocated to a new; elevated site several kilometers to the northwest, on the other hand, Amenhotep III Temple which is regrettably, left to be buried beneath the waters of Lake Nasser.

Those temples were devoted to the worship of deity Amon; the Wadi El Sebou temple is made entirely of stones; with the exception of the sanctuary and the inner Lobbies; which are completely carved into the bedrock.

Wadi El Sebou Temple has a pylon at the entrance, an open court yard; a hypostyle hall, in addition, an inner sanctuary. Also, many religion themes and noteworthy reliefs adorn the temple’s walls, and many parts of the temple have been turned into churches throughout the Christian period. To avoid the rising waters of Lake Nasser, this temple; like most other Nubian monuments; was salvaged and transferred 4 kilometres north of its original location.

The buildings of the temples were covered with a layer of plaster in the 5th century AD, which aided to preserve the original remedies for posterity. There is also an interesting scene in the central niche of Wadi El Sebou Temple,;where two statues of Amun and Re-Horakhty; which stood next to Ramesses II,; were chipped away by later Christian worshippers and tried to replace by an image of St. Peter.

On board Lake Nasser Cruises with Shaspo Tours; you will have the opportunity to see Wadi El Sebue Temple, as well as other Egypt Day Tours.