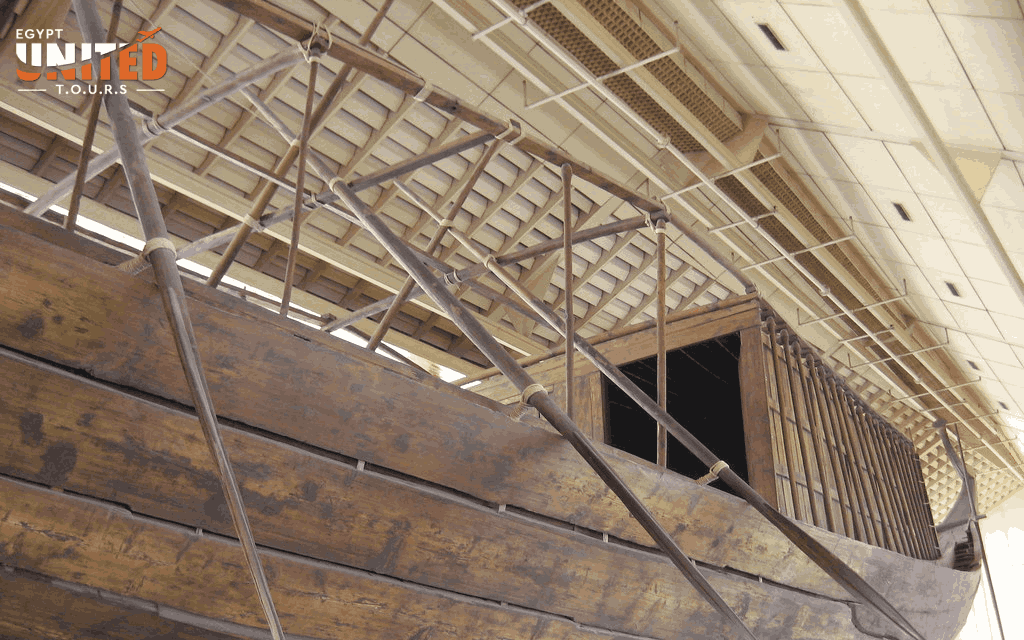 How Khufu ship Enables You To Sail through Majestic History in the Solar Ship Museum. this Museum was located on the Southern side of the Great Pyramid, however, it was moved 2020 to the Grand Egypt Museum.

In the shadows of the great pyramid in Giza, where you walk through the footsteps of the great ancient Egyptians, living the wizardry of building these majestic historical masterpieces, there is a solar ship with a unique pharaonic design had been built by the hands of those ancient Egyptians from 5000 years ago, will take you to the magic of sailing through the ancient Egyptian beliefs, living majestic history and spend fabulous times till arriving you at 2800 BC, it is the Khufu ship that waits for you in the Solar Ship Museum. 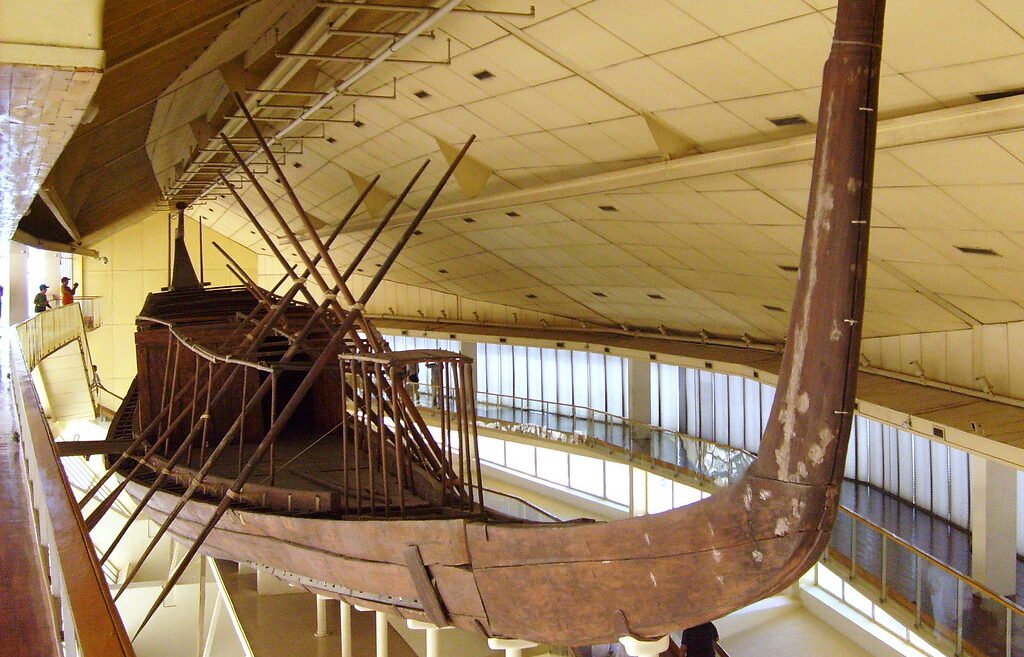 The Solar Ship Museum is where you feel as if you begin the magnificent journey with the pharaonic priests in the company of king Khufu, living the events of transferring the king Khufu’s mummy to visit the holy places in Heliopolis and other cities to restore his life then start his next life, then arriving the body to his royal tomb, Khufu pyramid. You will live each detail of this holy trip once viewing the Khufu solar ship, which will bring you back to around 5000 years ago.

Just head to the foot of the Great Pyramids to smell the same historical fragrant that the Egyptian archaeologist Kamal Al-Malakh, the discoverer of this solar ship, had smelled, it is the unique scent of cedarwood coming from a wall made out of limestone. 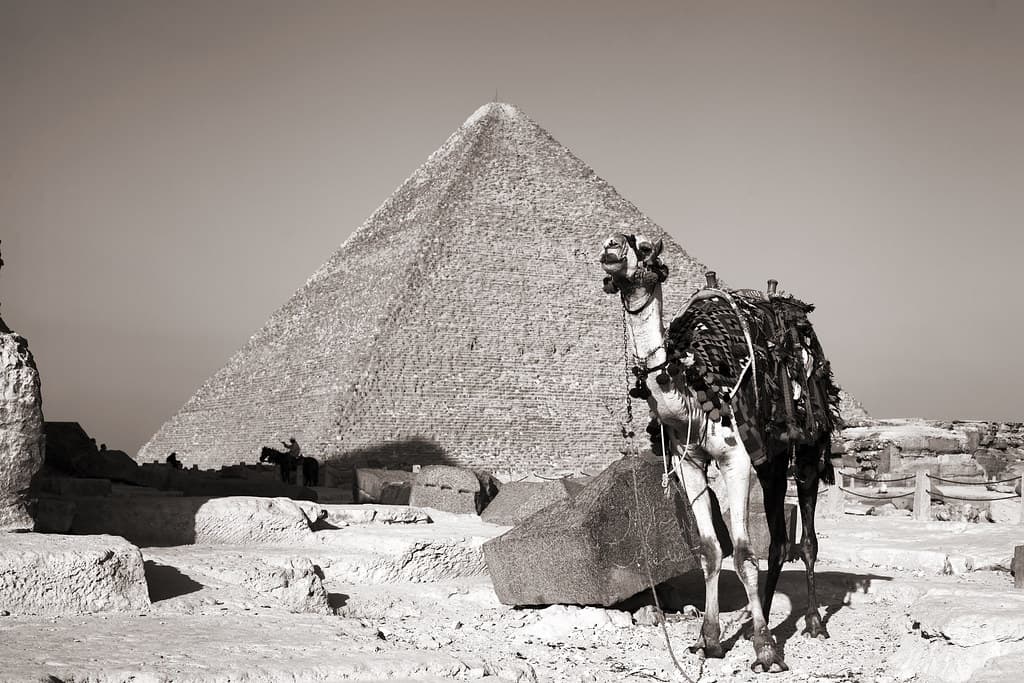 The Details of the Historical Journey of Khufu ship Till Now

The priests had built the Khufu ship to use it in the burying rituals of the king, placing his body after the mummification process in this solar boat to transfer him to the holy places where he could restore the soul of his afterlife, as according to the pharaohs beliefs the funeral ships were used to restore life from specific holy sites of the spirit of the gods. The legend of Ra told that the god Ra, which is the sun, would be a child from the sunrise, then a youth at noon, and finally an old in the evening, which had given them the belief of restoring the soul of the king from a solar journey accompany the sun in its daily trip, using the solar ships; then the king would live forever as a god in the Next Life. 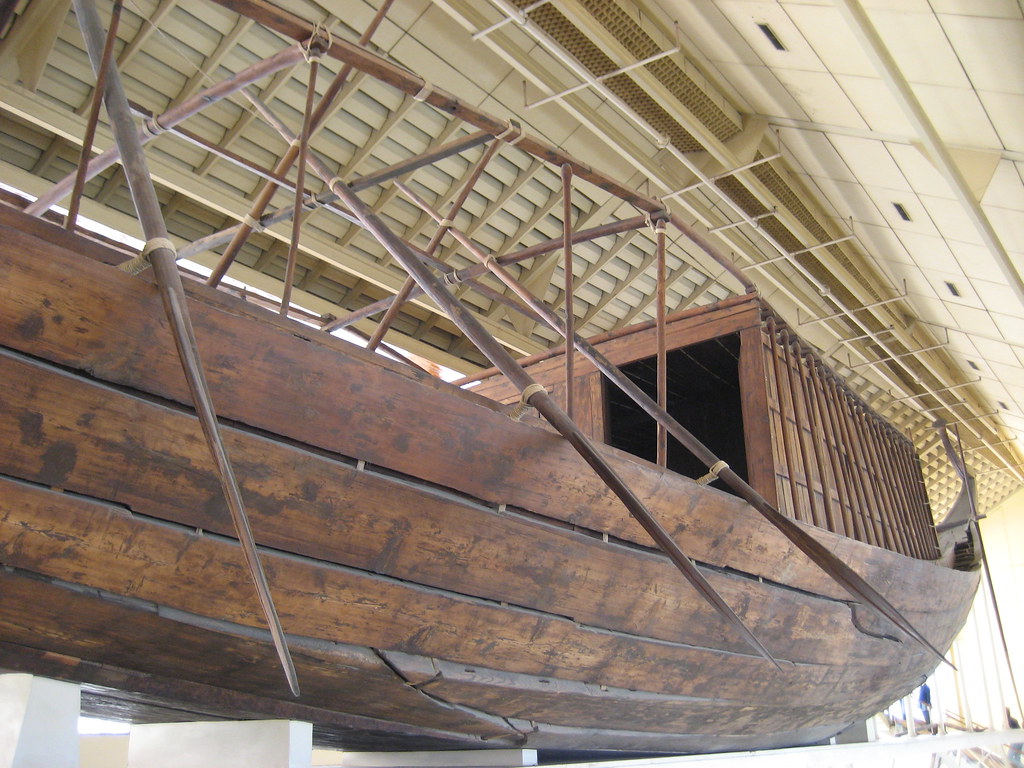 After the priests used the Khufu ship to restore the soul of Khufu and brought it to its royal tomb, which is one of the ancient world wonders, and the last survivor one of them, the great pyramid, which accompanying the sky thousands of years ago, they had buried him among his incredible dazzling treasure, then they dismantled the ship into 1224 pieces and placed it in the hole in 13 layers of the rocks tightly and in a way that preserved the boat from any dangerous factors, including humidity and also protected them against wind and water leakage.

The ancient Egyptians had divided the pieces of the boat into two groups under 42 pieces of rocks then cover them using a limestone wall.

More than 24 centuries have passed till arriving at 1954. At the base of the Great Pyramid in Giza, Egypt, Egyptian archaeologist Kamal Al-Malakh, Mohamed Zaki Nour, the civil engineer, and  Doctor Abdel Men’em Abu Bakr, when cleaning up the area of the Pyramids of Giza, they had discovered a wall made out of limestone, after digging into this wall, they had reached to 42 pieces of rocks unearthed, then finally they had found 1224 pieces, including 12 paddles, yes, it is the Khufu ship.

The great ancient Egyptian builders had arranged the exact location of every piece of wood and carved on it using the Hieroglyphic language to determine how to rebuild this solar boat, helping humanity to sail through the majestic pharaonic civilization. After more than 40 years, the Khufu ship had been reconstructed to its former glory to take you to the wonder of the pharaohs inside the Solar Ship Museum that was built directly over the hole where the boat was first found. So, you will live each detail of history once establishing this ship by the hands of the ancient Egyptians, preserving it then rebuilt it. 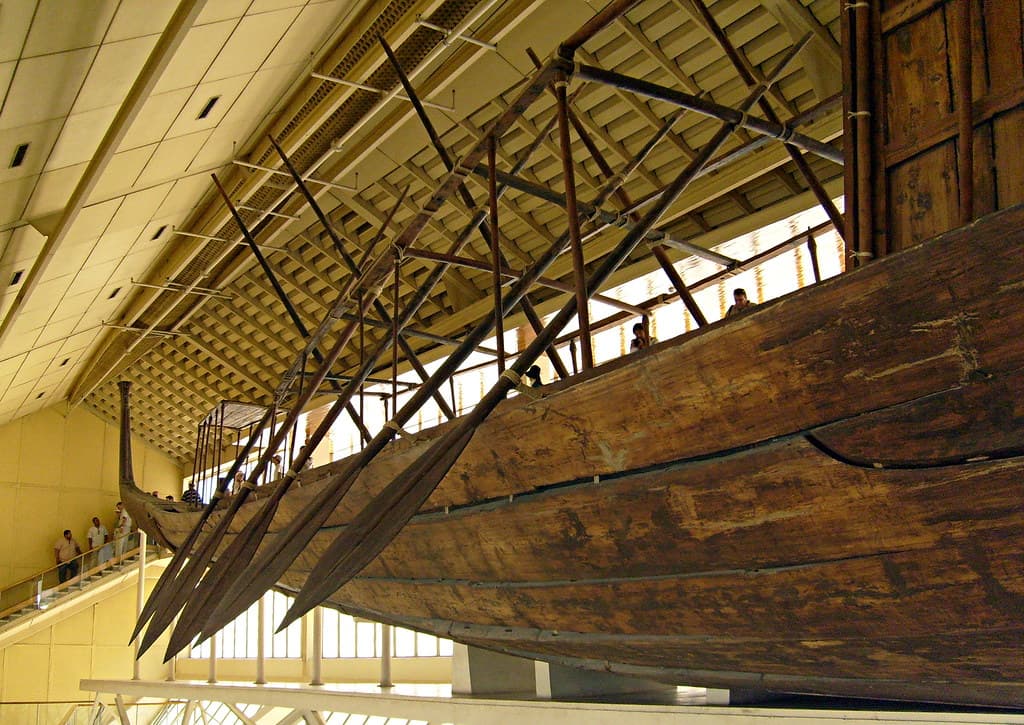 the Solar Ship Museum is well-prepared with the most modern techniques and technologies in order to preserve the solar boat for many generations to come, using a complete air conditioning system for the right temperature far away from humidity.

The Solar Ship Museum includes three floors, which enables you to view the pharaonic boat from three different levels, seeing majestic ship with 44 meters long and around 5.9 meters wide.

In the Solar Ship Museum, you will be surprised when viewing the ship’s compartment that stands upon three circular columns, which is located at the stern of the solar boat with a double ceiling based upon some pillars that were made in the shape of the papyrus plants to protect the captain of the boat against the sun’s rays. While you will be amazed by the intelligent tool that the pharaohs had placed in the ship to examine the depths where the boat is sailing to prevent it from hitting any sand islands or beaches, and also used to guide towards the western direction to unify with the sun rays before it vanishes at the time of the sunset, as you will notice a tool was manufactured by the Lotus and the Papyrus. 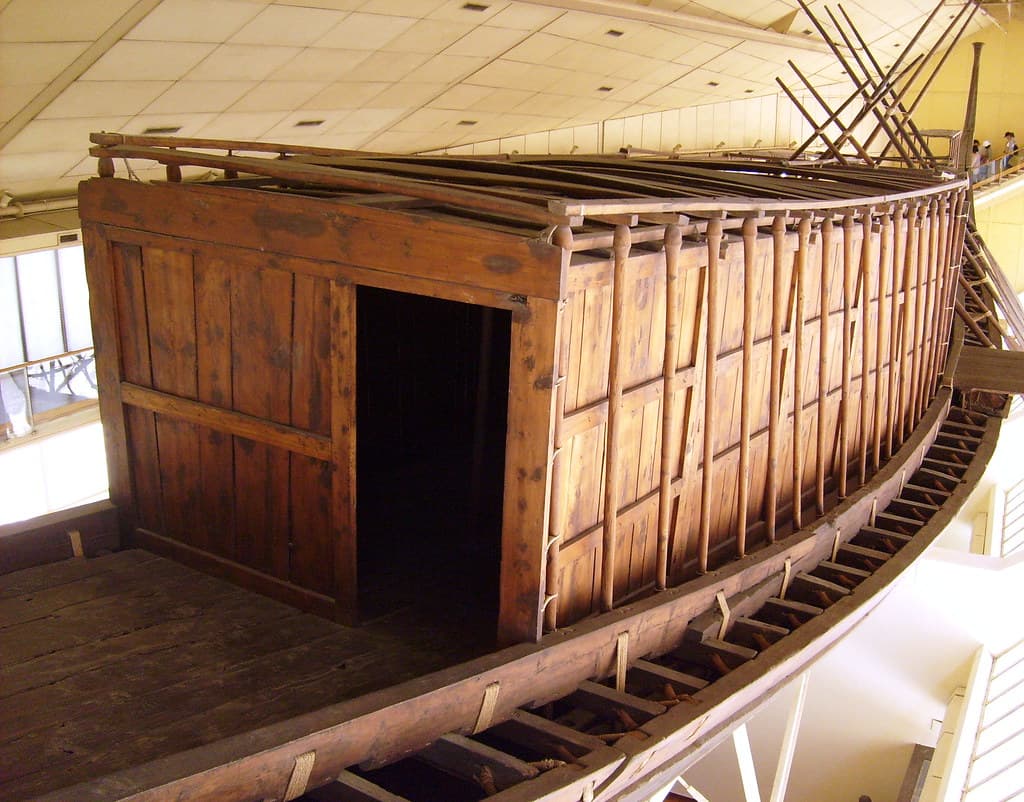 When entering the Solar Ship Museum, and go up to its floors to see the Khufu ship from all the sides, as you will find that the ship is located in the center of the museum on a base that rises from the ground by 8m, at this time you will be in a company of the 1st solar ship that was built in the pharaonic civilization.

Where is the solar boat?

In The Grand Egyptian Museum

Why is Khufu's boat called a solar boat?

According to an early belief, the great Egyptian pharaoh Khufu would have utilised the Khufu ships as part of his character as the sun god Re on his daily journeys across the sky. This is why they are known as solar boats.

Who did the solar boat belong to?

A 4,600-year-old ship once owned by the pharaoh Khufu was transported last weekend from its lengthy location close to the Pyramids of Giza to the Grand Egyptian Museum, a cutting-edge facility set to open outside of Cairo in late 2021.

What was the Khufu ship used for?

Usage of the Solar ship

Some claim that the ship is a solar barque, similar to the one that Khufu would have used to travel across the sky every day as the sun god Re. Others believe the ship was a burial vessel used to ferry Khufu's body from the Nile to the Giza Necropolis or on a last journey to sacred locations. 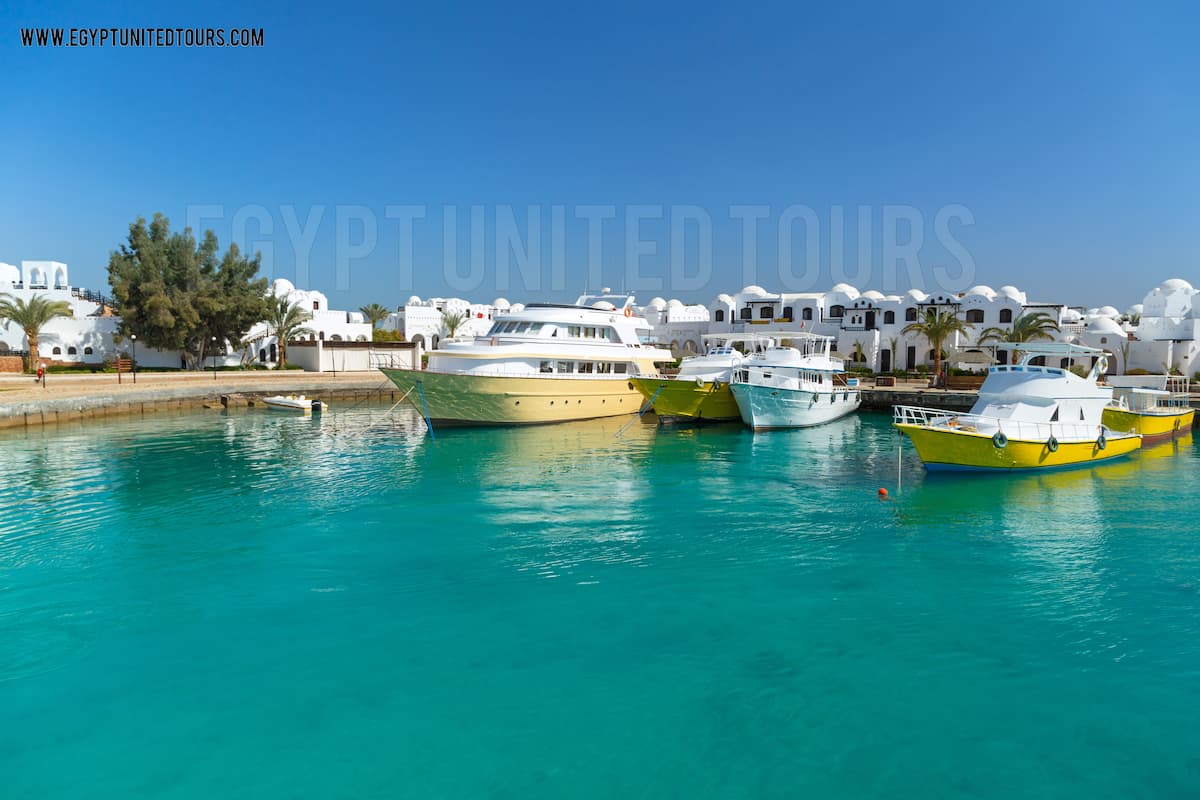 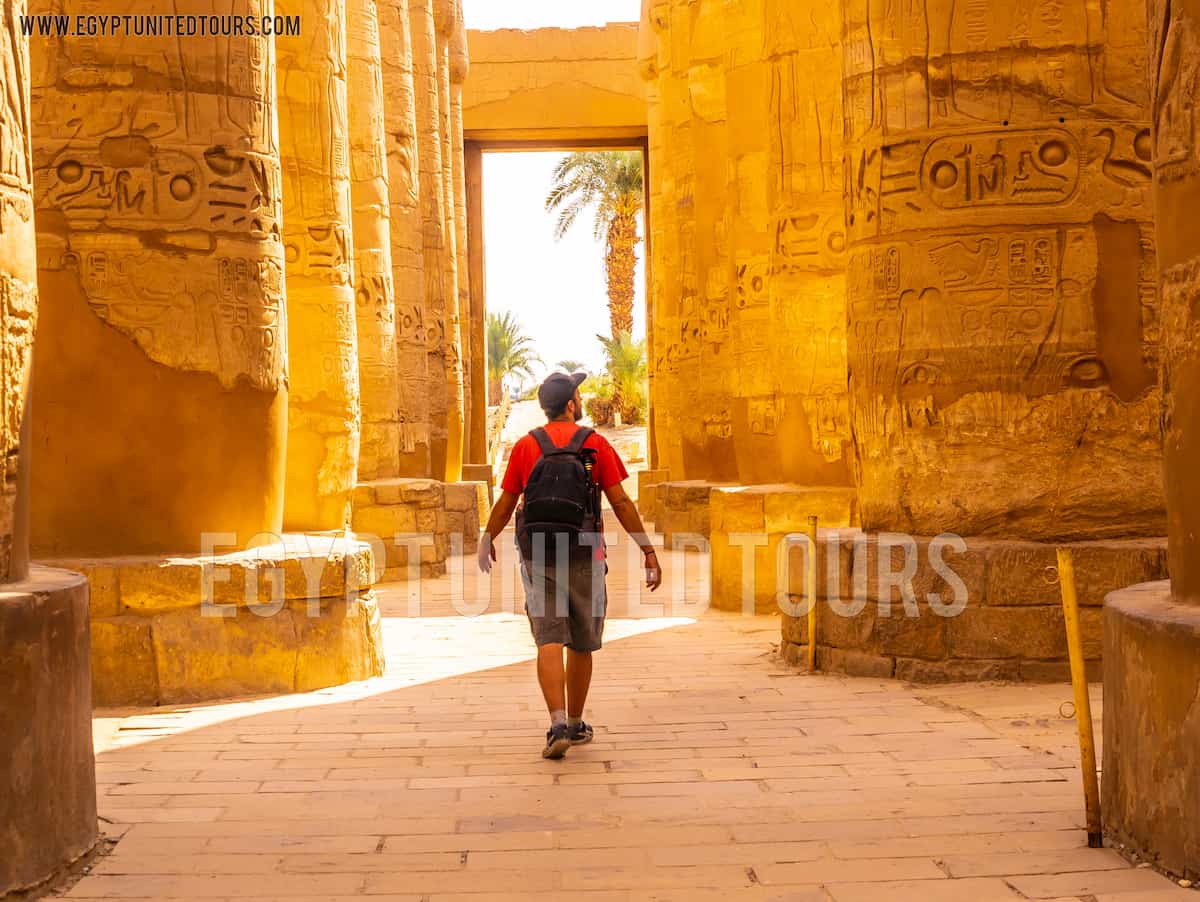