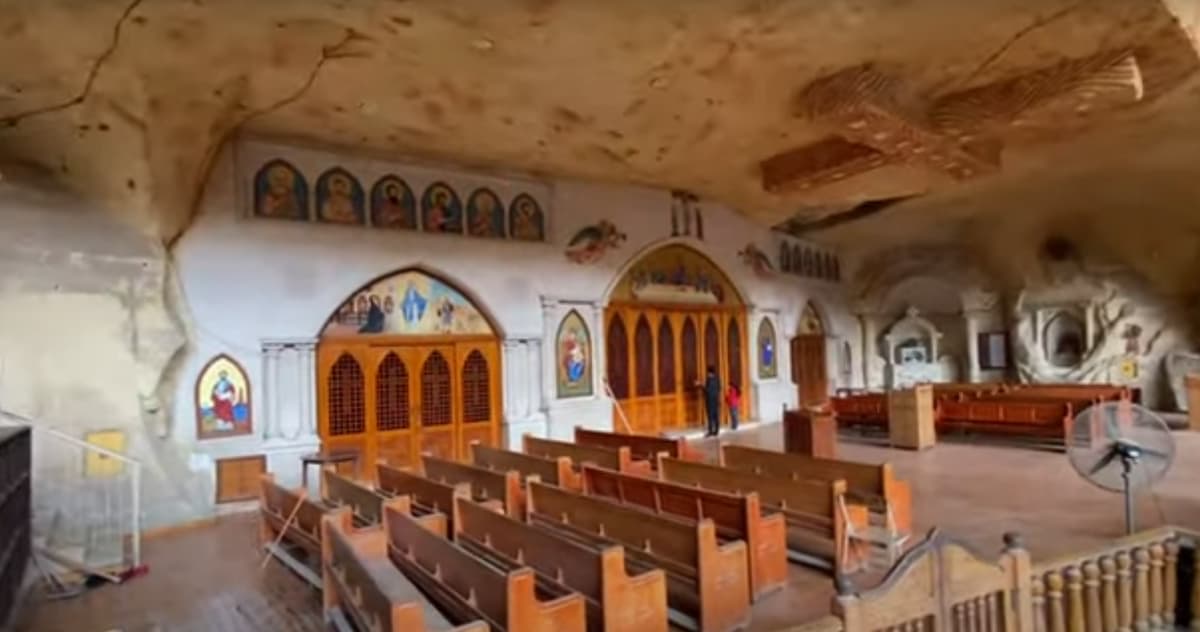 Monastery of Saint Simon the Tanner

Monastery of Saint Simon the Tanner, commonly known as The Cave Church in Cairo; is the biggest church in Egypt and the Middle East, located in the centre of Mokattam Mountain in southeastern Cairo. The Cave Church is located in the Zabbaleen city, which literally means “trash city.” In Cairo, this city has the highest concentration of waste collectors and recyclers.

The Cave Church also referred as the Monastery of Saint Simon; is located in the Mokattam mountain in southern Cairo, Egypt. In Arabic, the area is known as a ‘Garbage City,’ or Zabbaleen.

The Zabbaleen are descendants of farmers who began migrating to Cairo in the 1940s from Upper Egypt. They arrived to the city in search of job; fleeing terrible harvests and hardship; and established up impromptu villages all across town. Initially, they continued to raise pigs, goats, chickens, and other animals as they had in the past, but gradually discovered that collecting and sorting waste generated by city people was more profitable. The Zabbaleen would rummage through garbage, rescuing and selling valuable items, while the organic waste provided a great supply of food for their animals. This arrangement was so successful that subsequent waves of migrants from Upper Egypt arrived in Cairo’s newly established garbage villages to live and work.

The Zabbaleen’s improvised communities were moved across the city for years, attempting to elude the municipal authorities. Finally, a big group of Zabbaleen moved beneath the cliffs of the Mokattam or Moquattam quarries on the city’s eastern outskirts, which has grown from 8,000 people in the early 1980s to 30,000 people now, making it Cairo’s largest garbage collector community.

In 1975, the local Coptic Church in Mokattam Village was founded. The Zabbaleen felt more safe in their situation when the church was established. They began to use more durable building materials, such as stone and bricks, for houses. Because of their earlier eviction from Giza in 1970, the Zabbaleen had been living in makeshift tin houses up to that moment. A major fire broke out in Manshiyat Nasir in 1976, prompting the construction of the first church on a 1,000-square-meter location below the Mokattam mountain. Several other churches have been constructed in Mokattam’s caves. As a result, the Tanner Monastery of St. Simon became the greatest, with a seating capacity of 20,000 people. The Cave Church of St. Simon in Mokattam is the Middle East’s largest in general.

Churches of the Monastery of Saint Simon the Tanner

Which Saint moved a mountain?

The Coptic Orthodox Church today reveres Coptic Pope Abraham of Alexandria as a saint, and Al-Mu'izz commanded him to relocate Moqattam Mountain.

Is there a saint Tanner?

Near the end of the 10 century, while Egypt was ruled by the Fatimid Caliph Al- Muizz and the Coptic Pope Anba Abram, lived Saint Simon the Tanner (St. Sama'an, in Arabic).

When was cave church built?

In honour of St. Simon, who lived towards the end of the tenth century, under the Fatimid Caliph Al-Mui'zz, the Cave church was constructed.

Who Moved the Mountain in Egypt?

The Coptic Church is well-known for Mokattam because Coptic Pope Abraham of Alexandria is said to have caused the mountain to rise and fall.