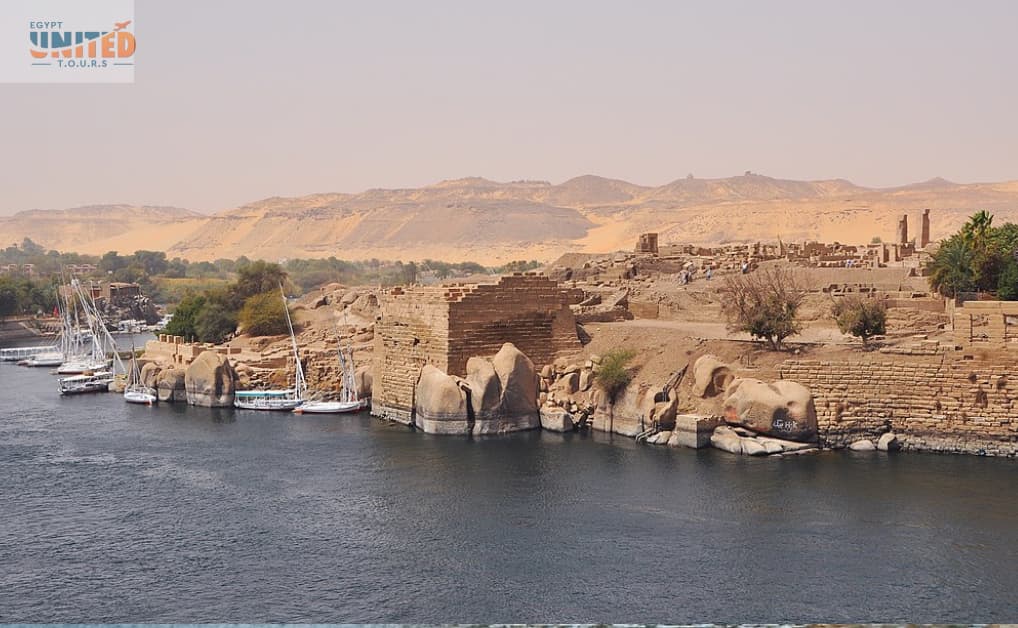 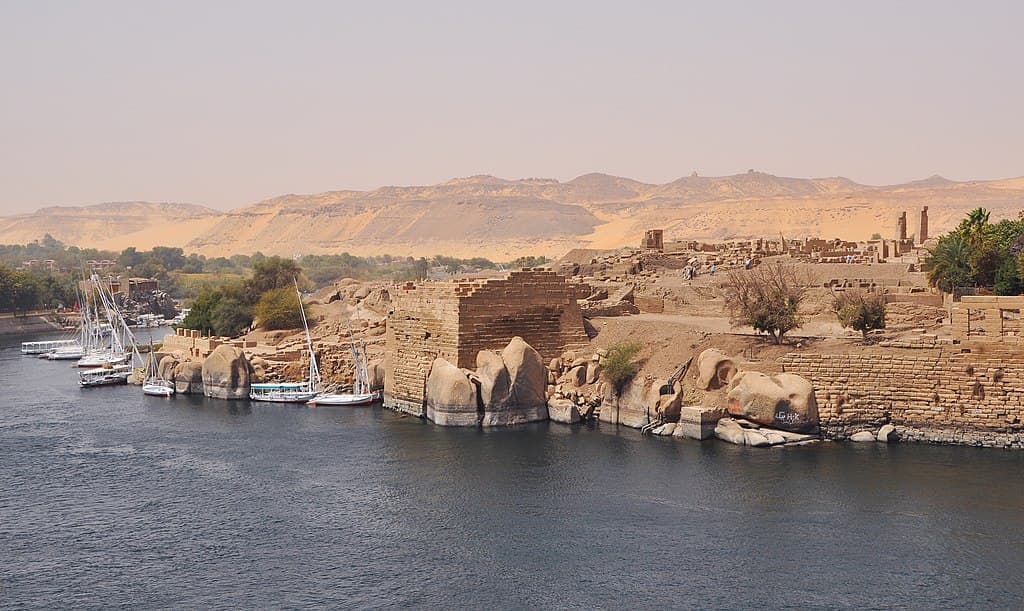 Secrets and monuments reveal the truth of the successive civilizations in Egypt, are located in the center of the Nile, where you will be in one of the oldest human gatherings and housing complexes dating back to pre-dynastic years, meeting artifacts that will push you to the wave of the eras finding yourself in the embrace of 3500 BC, seeing the temple when it was still a simple mud-brick hut located between 3 High granite rocks. Suddenly you discover that you are amid the trade center and walk around the strategy point throughout the Pharaonic period. It is Abu, Elephantine Island today. 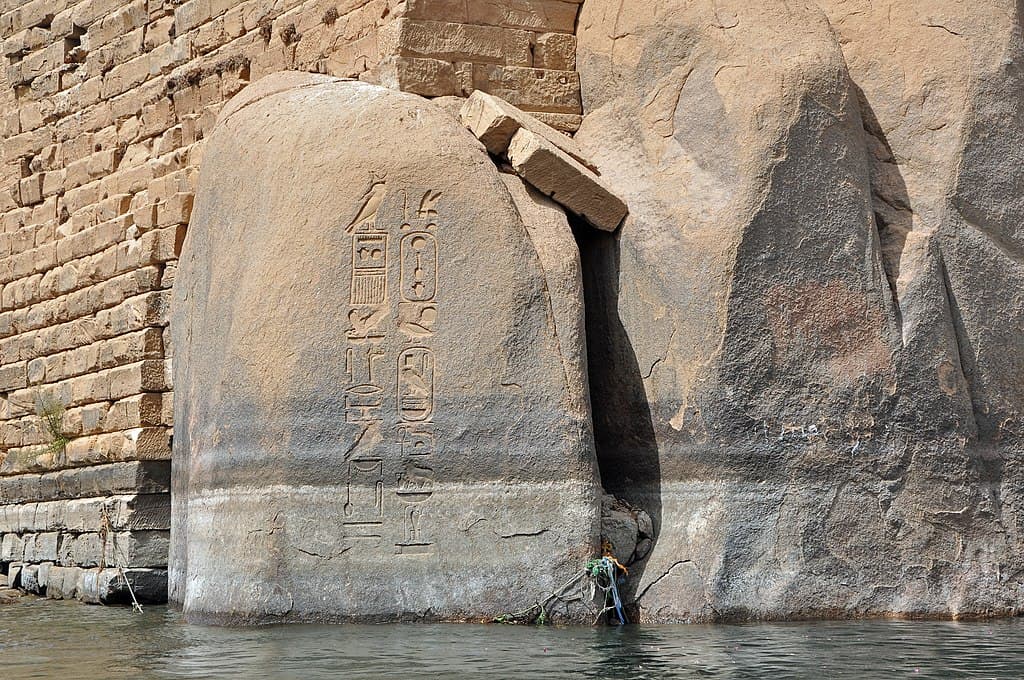 Artifacts in Elephantine Island will transfer you into vital details of the ancient Egyptian civilization and its creation, standing in a place that was one of the most factors to establish all the greatness you will meet through your journey in the historical eras in the cradle of the civilization.  How that?

Not Just the Ivory, but Elephantine Island was also a focal point on the trade routes to the south of Egypt, as well as it was the main headquarters for all government, military and commercial missions heading south or returning to the pharaohs homeland, as a result of being difficult to access, it was a defensive space, and the southern area of it was even a fortified space most of the time, achieving the full safety for the ancient Egyptian civilization. 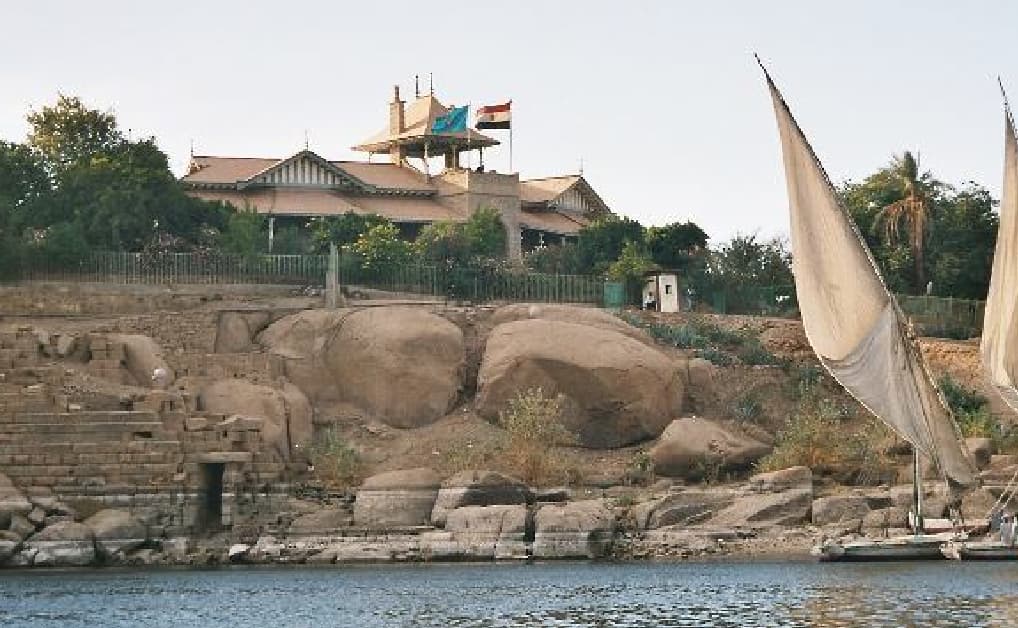 So, visiting Elephantine Island is to be in the heart of the departure point for the military and commercial expeditions into Nubia and the south during the ancient Egyptian civilization, not just that, but the geological formation of the island – as the island grew up on a granite rock – gave great importance to Elephantine, as its black, gray and red granite stones were used in a number of construction and artistic works, during the old kingdom of the pharaonic civilization to the new kingdom.

So, when wandering in the majestic temples, seeing the giant structures and the great columns all over Egypt, you have to realize that this important customs point and trading center is credited with all of this grandeur. Elephantine Island.

What Will You Meet When Sailing to the Ship of Secrets,  as Some Call it, or the Jewel of the South. 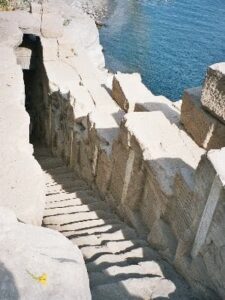 You will find yourself surrounded by relics dating back to the era of the ” Naqada II ” in the year (3500 BC), meet the religious temples that date to the era of Naqada III around (2300 years BC), to find yourself living with the Elephantine Island the era of the unification the two countries by King “Narmer” and the establishment of the unified state around 3000 BC, and how this added commercial importance and how its contribution was to establish the ancient Egyptian civilization.

In this base of building the ancient Egyptian civilization, as not visiting it means that you will miss a link in the history of the pharaohs, you will find amazement to stand in full astonishing seeing pharaonic craftsmen’s workshops, witnessing where the ancient Egyptians established their majestic society and history. These workshops date back to the late Fourth Dynasty (2600 BC to 2450).

Granite rocks with inscriptions will attract your attention to come to them while you are in confusion about what the ancient Egyptians left in these messages! You will realize that the kings of the Sixth Dynasty had left for you a memory to tell you about their visits to Elephantine Island, to walk on their footprints and live what exactly they had lived, visiting the temples there.

The Temples in the Elephantine Island

There are ruins of temples on the island from different eras, Senusret I built an old temple during the Middle Kingdom, and another new temple was built of limestone during the sixth Dynasty Era that is attached to the courtyard for ceremonies so that the people of the city celebrated the coming of the flood that was beginning once hearing the sound of the rushing of the waters of the flood as Elephantine Island was the first spot they could hear the running water of the flood.

While you stand in the imagination of the atmosphere of the ancient Egyptian celebrations, you will find that there is a temple dedicated to the god Khnum in the city center; it is one of the most important landmarks in Elephantine Island that was established in the 3rd Dynasty and rebuilt during the Thirtieth Dynasty before the Greco-Roman period. A granite gateway will shine in front of you to call you its stories finding inscriptions representing Alexander in ruling Egypt; at that time, you will realize that Alexander the Great wanted to leave his prints in this majestic temple, building this gateway. 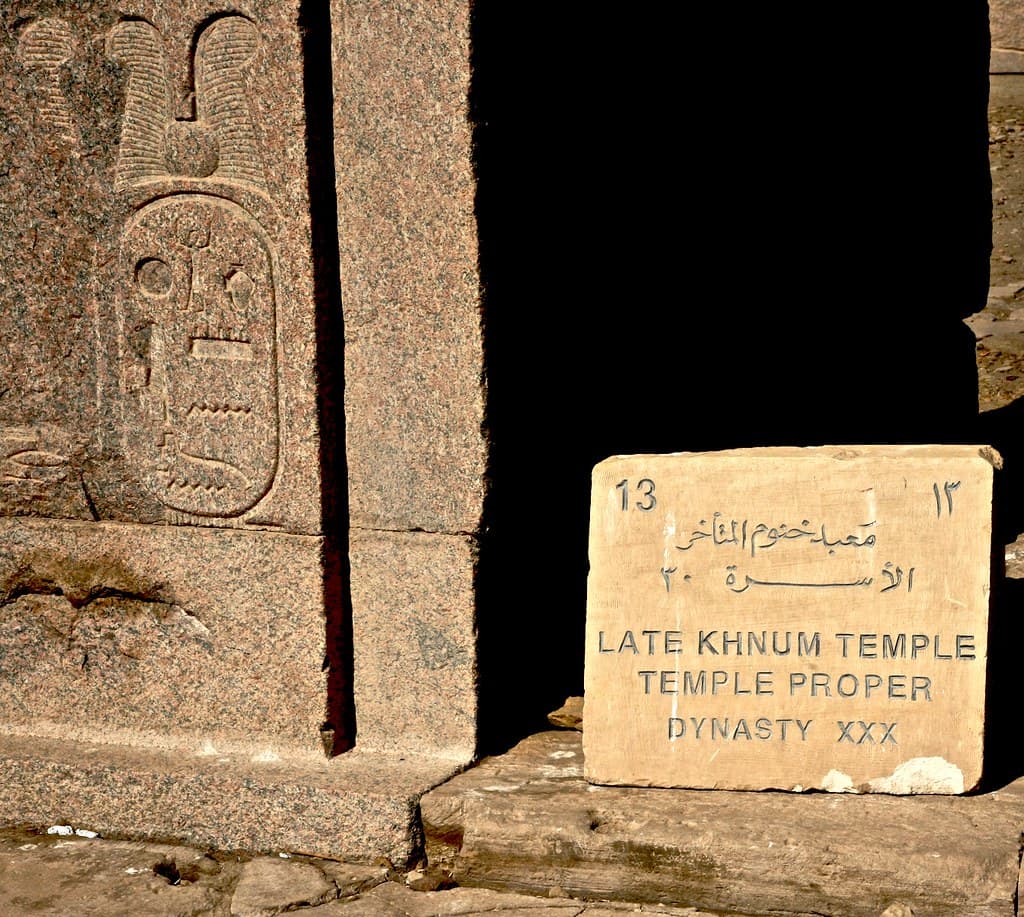 Elephantine Island was the main cult center of the Khnum worshiping, the ram-headed god, the lord of the inundation, and the creator of humankind on his potter’s wheel, while there is another temple dedicated to Khnum’s wife, Satet. It was built around 3000 BC. 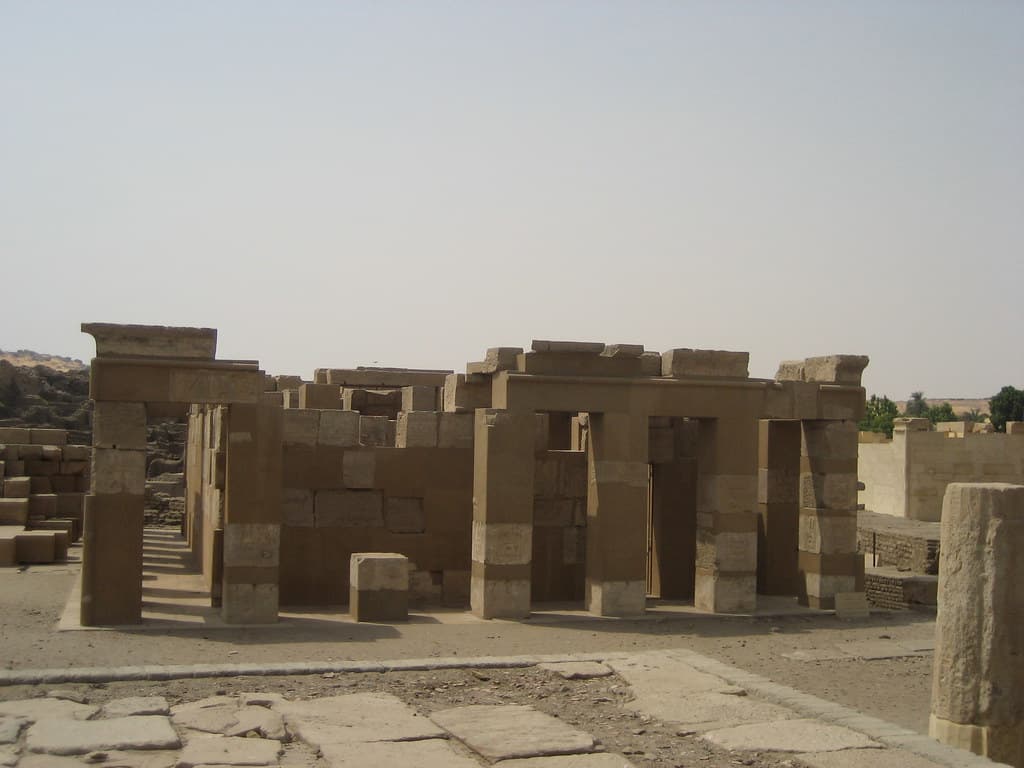 While you are in your tour inside the temples of Elephantine Island, you will find the ruins of a temple from the reign of Queen “Hatshepsut,” Temple of Thutmose III and Amenhotep III, to wander around this majesty, going around these religious complexes that took over more and more the island till you will arrive at the east bank, where you will be in the pharaohs residential areas in the north and the east of the Elephantine Island.

Still There Are Alive History in the Land Of Elephantine Island 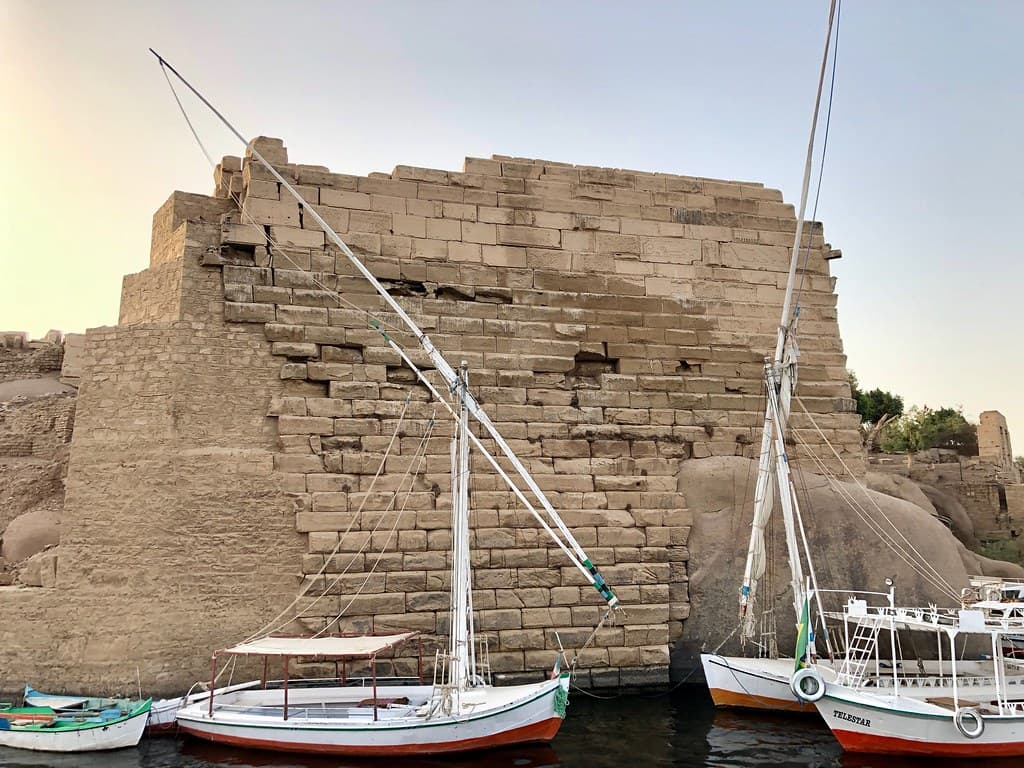 Not just the temples that were located in Elephantine Island, but you can live with the ancient Egyptians process of measuring the level of the Nile River by the Nilometer they had set by their hands.

It is stone steps that go straight to the Nile River, and on the left and right of the stairs, various signs and numbers can be observed. After you live this essential experience for the pharaohs that they had done annually due to the importance of the Nile River and their serious interest in its rate, you will need to go deeper in Elephantine Island; still, there are more.

In the same charming style of the pharaohs’ tombs, you will find numerous outstanding rock tombs dating to the Old and Middle Kingdoms are situated high in the cliff on the west bank of the Nile with vibrant inscriptions and great treasures dedicated to burying the nobles.

There are records that prove that there is a Jewish community that lived within Elephantine Island around the 5th century BC, so complete your steps inside Elephantine Island till arriving at the temple they used for their worshiping to meet their artifacts.

How Can You Arrive At the Elephantine Island!

This island is rich with its archaeological treasures from the oldest ages until the Roman period, to walk in the length of about 1500 meters and width is about 500 meters while the monuments call you from each area to tell more details about the great history, is located facing the city of Aswan from the western side in the center of the Nile, so the lonely way to arrive at this unique island is the sailing through the Nile by a boat the same as the ancient Egyptians.

That is how from the first step to ending your amazing tour in Elephantine Island, you will live like a pharaoh, living the history, not just seeing it.

What is Elephantine Island?

In the Nile, opposite Aswan city in the Aswan province of Upper Egypt, lies an elephantine island known as Arabic Jazeera Aswan. The Greek term for pharaonic Abu is elephantine.

What has been found on Elephantine Island?

A sarcophagi in Elephantine contained a piece that depicted the god Khnum in mummified form and was embellished with a gilded ram head. Goddesses Satis and Anukis are said to have helped god Khnum oversee the cataract region in Egyptian mythology.

Why is Elephantine island important?

Khnum, the deity of the cataracts with a ram's head, lived on Elephantine, according to ancient Egyptian mythology. From caves beneath the island, he governed and protected the Nile's waters. He was revered in this location as a member of a late triad of Egyptian gods.

What happened to the temple in Elephantine island?

Since 1911, information on the Jewish Temple at the military installation on Elephantine island has been available through papyrus sources. It was built somewhere in the sixth century and was destroyed by the priests of the Egyptian god Khnum in 410 BCE. The temple was finally abandoned despite being restored sometime after 400 BCE.