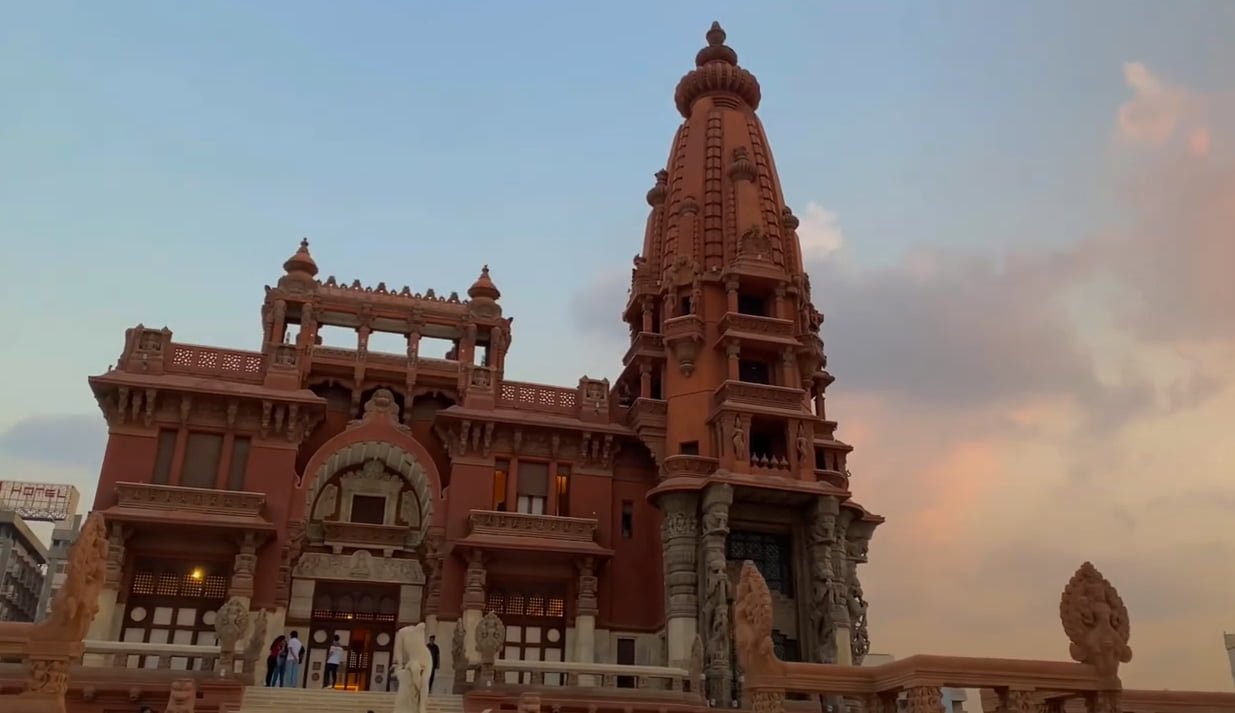 History of the Baron Empain Palace

For years, the Baron Palace, one of Cairo‘s most prominent and oldest historical palaces; has been the source of stories and tales linked with young people. Following the distribution of images of the rebuilt palace; Egyptians expressed their delight at the event.

This castle was given the name “Baron Palace” after its owner; Belgian millionaire Baron Édouard Louis Joseph Empain; who arrived in Egypt from India at the close of the nineteenth century; then, few months after the Suez Canal opened.

Empain was so enamored to Egypt that he made the tragic decision to remain there till his death. Even if he dies outside of Egypt’s borders; he wrote in his will that he wishes to be buried there.

Also, Empain built the palace in Egypt to serve as his dwelling. on the other hand, the magnificent historical palace was constructed in 1911 in the center of Heliopolis; Cairo; on Al-Oruba Street; the main road leading to Cairo International Airport.

it was a prominent engineer who held the title Baron; which was bestowed upon him by the King of France in recognition of his work in the construction of the Paris metro.

on the other hand, Heliopolis was only a barren desert at the time; and during this time; in addition to, Empain proposed to the Egyptian government the establishment of a community in the desert east of Cairo, naming it “Heliopolis;” which means “city of the sun.”

He also considered establishing a metro line within the neighborhood in order to attract the greatest population of Egyptians to live in this new suburb; and he commissioned André Barcelona; a Belgian engineer who was working for the Paris metro company at the time; to design a metro line that would connect the neighborhood or the new suburb.

The Baron was inspired by the Angkor Wat temple in Cambodia and Hindu temples in Odisha. The palace was built in 1911 and was designed by Alexandre Marcel and embellished by Georges Louis Claude.

Is the Baron Palace open?

The historic Baron Empain Palace in Heliopolis is now open to the public for tours. The magnificent palace underwent a thorough renovation to return to its original state from when it was built in the nineteenth century.

In honour of the Belgian businessman Baron Édouard Louis Joseph Empain, who arrived in Egypt from India at the end of the 19th century, just a few months after the Suez Canal opened, this building was given the name "Baron Palace." Empain chose to stay in Egypt till he passed away because he loved it so much.

Why Baron Palace was built?

Edouard Empain, a Belgian manufacturer who arrived in Egypt in 1904 to build a railroad line connecting the lower Egyptian city of Mansoura to Mataria on the opposite side of Lake Manzala, commissioned the construction of Baron Empain's Palace in 1906.

Does the Baron palace rotate?

The palace was built by French architect Alexandre Marcel to have a revolving base so that it could catch the sun's rays at any time of day.