Tutankhamun’s status as ancient Egypt’s most pharaoh was solidified when his entire tomb was discovered by archeologists. Why is the Tutankhamun tomb so important?

Has his tomb been opened? Can you still see his tomb? There are many things that come to mind when thinking about ancient Egyptian history. So here are some facts about Tutankhamun’s tomb.

Why is King Tut so popular?

Discovered by Howard Carter, a British archeologist, the tomb of King Tutankhamen is one of the most famous because of its well-known discovery. Carter actually spent eleven years of his life excavating in the Valley of the Kings before discovering Tut’s tomb in 1922. With the discovery of King Tut’s tomb, he has become the most famous Egyptian of all. His tomb was the only entire royal burial discovered in modern times. The tomb was significant because it allowed researchers and archeologists to document the appearance of Egyptians King Tut’s tomb.

What was found in King Tutankhamon’s tomb?

The most precious and unique find in King Tutankamon’s tomb was three coffins stacked with each other in a stone sarcophagus. Also, numerous pieces of jewelry and gold, statuary, clothes, furniture, weapons, a chariot, and many other numerous objects were found. Today, these artifacts cast a dazzling light on ancient Egypt’s history and culture.

Design of the Tomb of King Tut?

Tutankhamun or the tomb of king tut is located in the Valley of the Kings. The tomb is designed similar to that of the kings of the eighteenth dynasties. The entrance has a flight of stairs that leads to a short corridor. The antechamber is the first room that has many of Tutankhamun’s domestic belongings.

Also, an annex is attached to this room and a door is found at the end that leads to the burial chamber. Off the chamber is a treasury room that has the most outstanding item- a stunning golden canopic shrine. The walls are painted with scenes of King Tut in the afterworld. 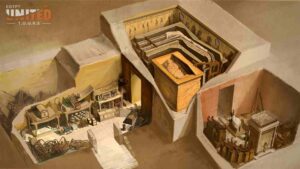 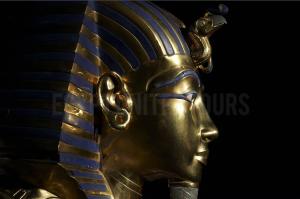 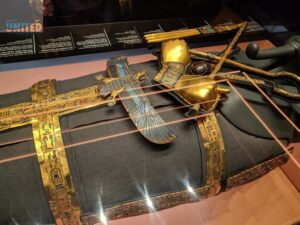