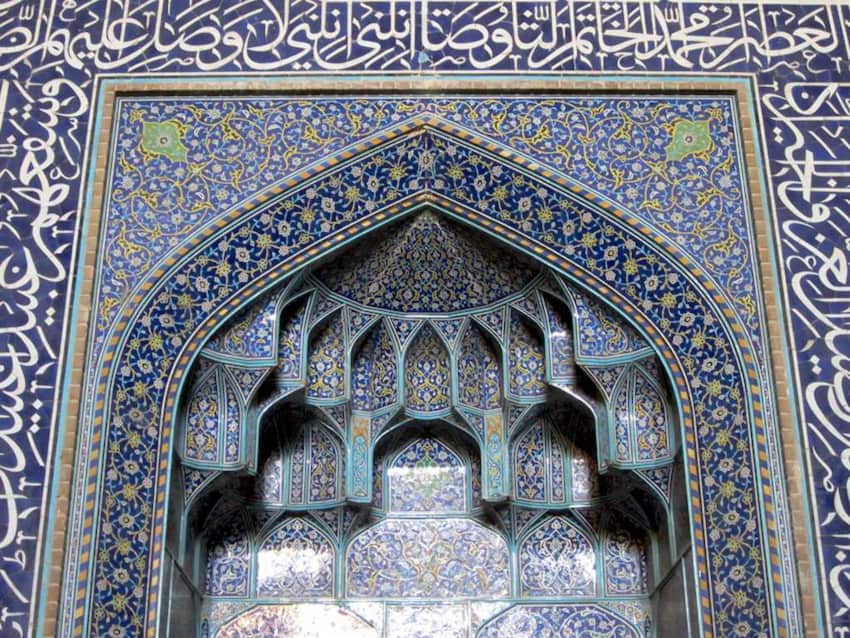 Egypt United Tours › Best of Egypt › Islamic Art Unique architecture and Interesting Cultural
Contents [ Show/Hide ] ▼ Show
1 Your Soul Will Be Charmed To Run With Longing Via Islamic Eras & See The Miracles Of Islamic Art
1.1 How are the Ceilings and The Walls In The Islamic Architecture!
2 Successive Eras Get You A Gift Of Art Islamic Architectural Masterpieces In Egypt Streets
2.1 For Which Eras, Al-Muizz Li Din Allah Street Will Transfer You?
2.2 How Will Be Your Tour Inside a Vibrant Mamluks Market!
2.3 Get Your Relaxation Amid 1,000 Historical Year In Al-Hakim Mosque
2.4 How The Eras Run In Al-Azhar Mosque With Its Unique Design Art!
2.5 The Secret Behind The 4th pyramid In an Egyptian Mosque
2.6 About Mohamed Ali Mosque
2.7 Aout The Islamic Art of The Castles in Egypt

Unique and distinctive designs transcend time and space. Remarkable architecture crosses the different languages and cultures to create a special influence in each soul that sees this art with its bright and vibrant colors, rich patterns, and symmetrical silhouettes constructed in wide areas. It is the Islamic Art in the architecture with its special spirit.

All of that gathered to produce architectural miracles in the form of Islamic Shrines, castles, homes, palaces, forts, public buildings, and mosques with their domes. To find these domes welcome you once you enter historical mosques. At that time, You will be in the sea of thinking, asking what are the complex mathematical and engineering operations of this unique building!

In addition, the Minarets that stand high with full pride challenge the time, wide courtyards pump tranquility in your soul. While the unique Islamic decorations catch your gaze. And the precious tiles with geometric mosaics and exotic stones will be shimmering in your eyes.

As well as the wonderful calligraphy decorations, and the arabesque that spread in the walls with its repetitive geometric formations. They often follow the shapes of plants and sometimes animals (especially birds).

How are the Ceilings and The Walls In The Islamic Architecture!

When you look up to the ceiling, the Muqarnas that hang will astonish you. And then the Mashrabiyas will catch your eye. Do not hesitate to look outside through these Mashrabiyas to feel as if you go back hundreds of years. It is a wood that was cut to be as window blinds.

On the sides of the Islamic art architecture, the major pylons with their alluring capitals will surprise you. 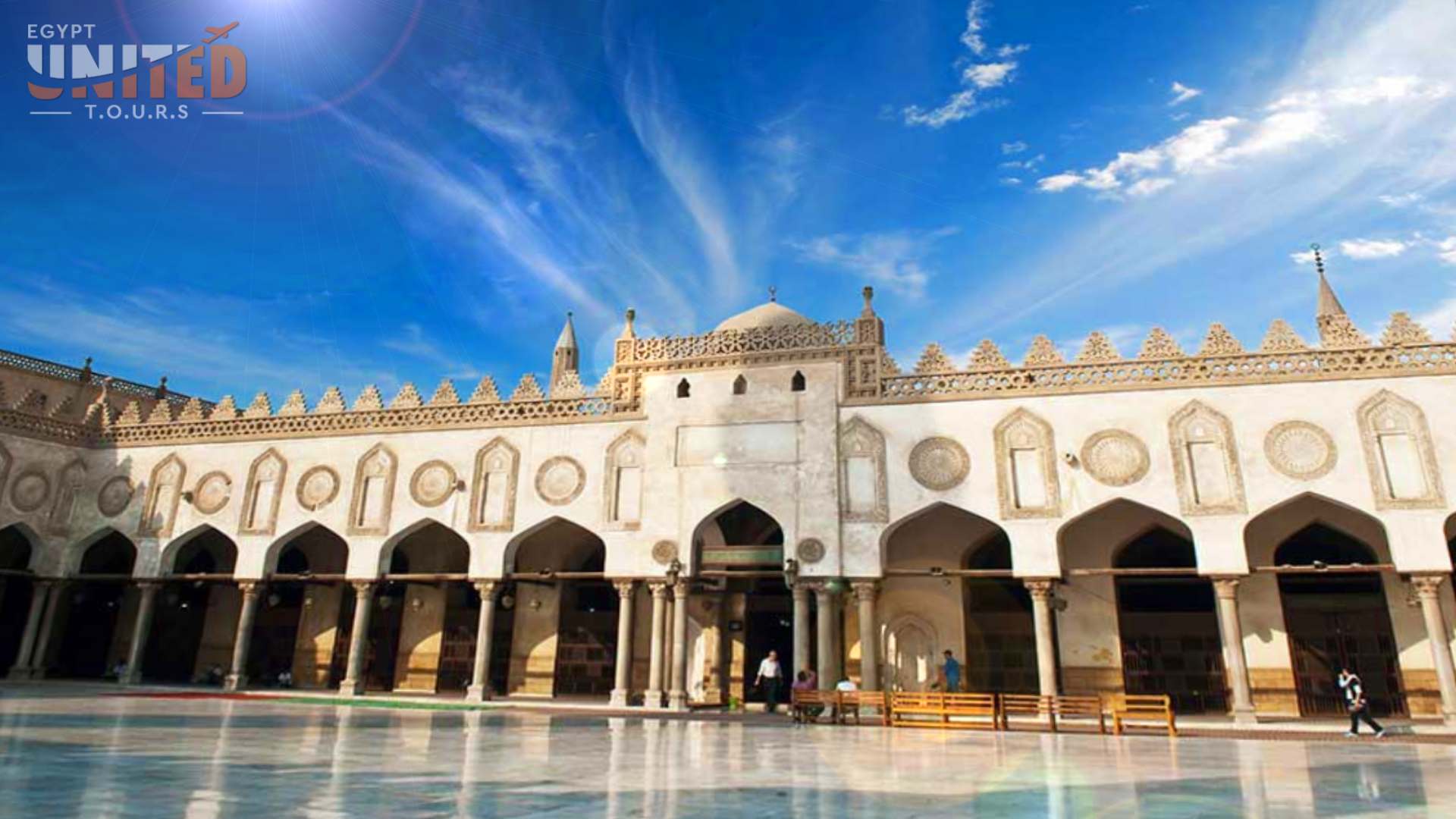 Each building has its unique design that carries its character and time with decorations of gold, copper, seashells, and valuable collectibles. Egypt is where you witness all Islamic architecture in its various forms via eras.

Egypt is a great witness to this unique Islamic art architecture. Not just for the buildings but also streets to walk through Fatimid streets in Al-Muizz Li Din Allah. It is the greatest open museum and one of the oldest streets in the world. You will find amid this architectural sightseeing a lot of secrets about Islamic art in architecture.

For Which Eras, Al-Muizz Li Din Allah Street Will Transfer You?

Al-Muizz Li Din Allah includes a set of monuments and architectural values ​​dating back to a series of successive eras.  since the establishment of Fatimid Cairo and through the Ayyubid and Mamluk and Circassian Mamluks, which is the medieval period, which extends from the tenth century until the sixteenth century AD.

then the Ottoman rule, which also left many architectural elements and monumental buildings. 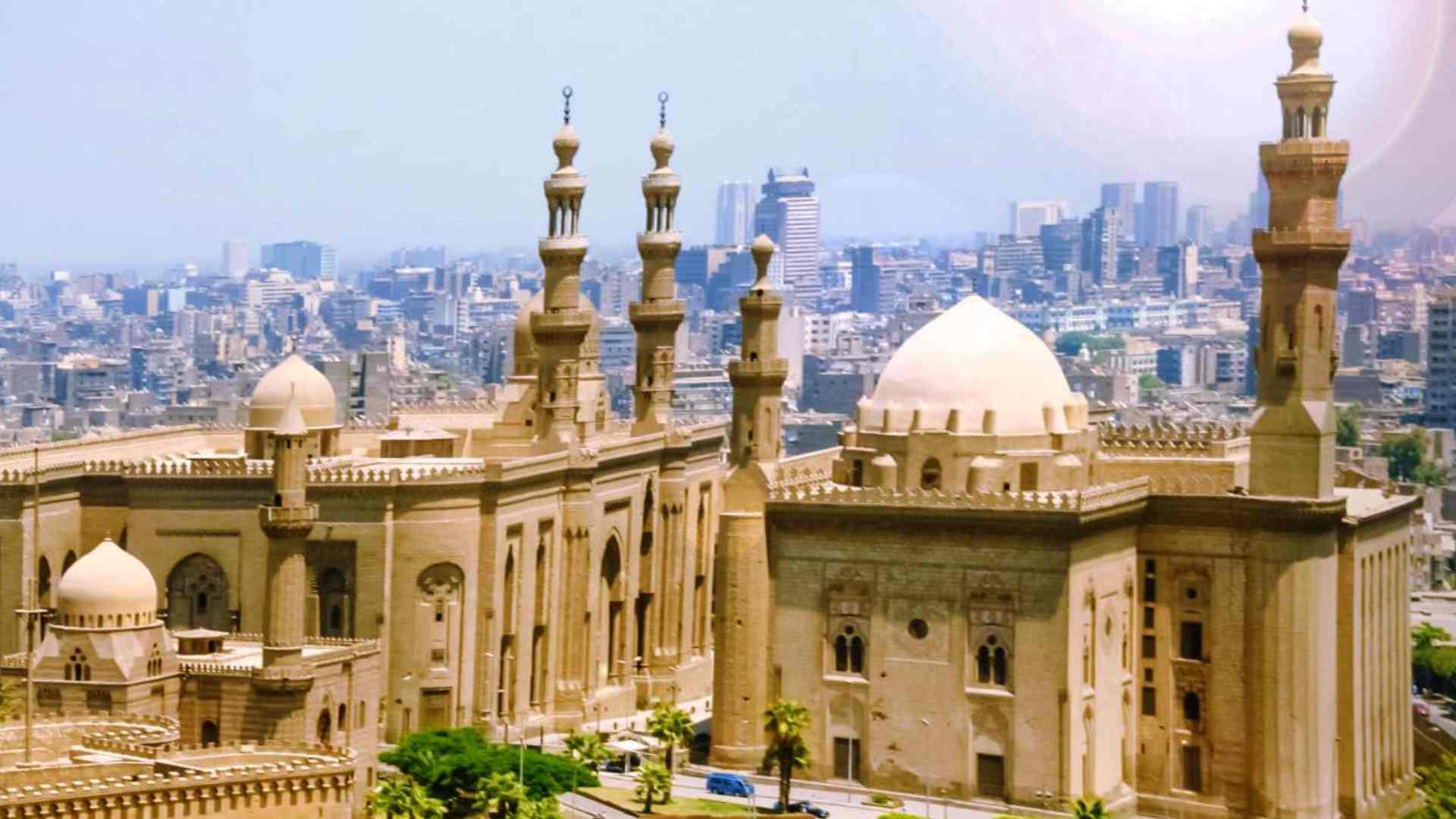 The street also includes monuments of the era of Muhammad Ali; these monuments abound in spirituality and beauty that testifies to the splendor of the Egyptian Muslim artist and architect.

Buildings and facilities throughout the successive Islamic eras in which the luster of the beauty of Islamic art is available awaiting you in Al-Swords Street branching from Al-Muizz Street.

The most important Fatimid street in Cairo is El-Khranfash Street, which was a square full of caliphs, princes, and ministers. It is a point when you cross it, you will start your celebrations in the Fatimid era. 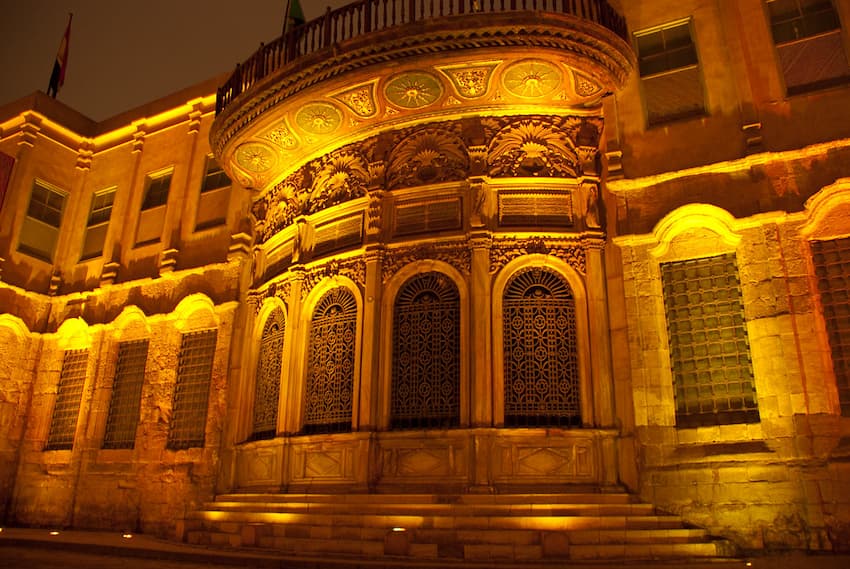 In a scene that combines sophistication, luxury, and the fragrance of history, the streets and buildings of Khedivial Cairo in the center of the capital, which were founded by Khedive Ismail, are no less beautiful than Paris in shaping the consciousness of Egyptians, technically and politically.

How Will Be Your Tour Inside a Vibrant Mamluks Market!

And come back again to go shopping with the Mamluks, in the 14th century at Khan al khalili, which is an open-air market and still keeps the spirit of its alleys that are lined up in a complex, intertwining, multi-colored form, as no one has yet reached the architectural philosophy on which Khan al khalili was built with, and its land that has been paved with glossy black basalt stone, and the market has been covered with wood that defies time and erosion factors, and the sun infiltrates many shops that form together basements full With rare and skillfully crafted treasures and artifacts.

While the Islamic historical tiles attract your soul to complete your tour within the years of the eras, go inside the remarkable Islamic buildings, as you can enter Al-Hakim mosque, in Al-Muizz Street.

Get Your Relaxation Amid 1,000 Historical Year In Al-Hakim Mosque

It is an architectural masterpiece that testifies to a 1,000-year history, where you feel fully relaxed with its white tile and wide area with the Islamic art designs in its domes, pylons, two minarets surrounded by two great pyramid-shaped bases. 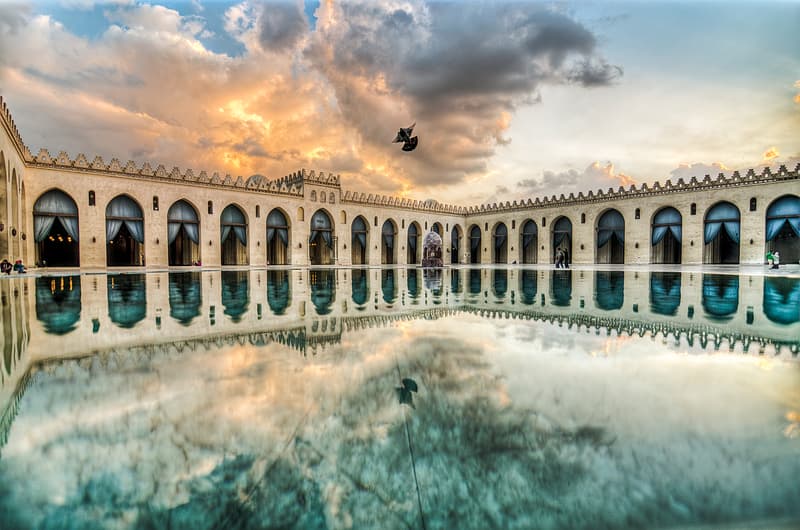 Its entrance is the first prominent entrance in Cairo’s mosques. As it covered by a cylindrical vault 3.48 meters wide and 5.5 meters long.

When you go out of Al-Muizz Street, you will be in the middle of Al-Azhar Street that King Fouad’s paved. And when you cross that street that carries the touches of Fouad’s engineers and workers, you will find your soul pushes you to enter Al-Azhar Mosque.

How The Eras Run In Al-Azhar Mosque With Its Unique Design Art!

Jawhar al-Siqali who was seAl-Azhar Mosque, the first Fatimid caliphs in Egypt. There you will witness the Islamic art in architecture in the first mosque built in Cairo after Muizz Li Din Allah had established it to be the capital of the Fatimid state. The city, which acquired the title of the city of a thousand minarets.

So, Al-Azhar Mosque is the oldest existing Fatimid monument in Egypt.

Before establishing Fatimid Cairo, the capital named Fustat. And it witnessed the earlier Islamic art design. As you can visit Amr Ibn al-Aas mosque. This mosque is 13 centuries old. Actually, it is the oldest mosque built by Amr Ibn Al-Aas when he conquest Egypt.

You will fall in love with this historical mosque with its corridors and solid marble pillars with different capitals that defy time. Also, the unique decorations will shine in your eyes.

In addition to the wooden pulpit and on the qibla wall, there are two paintings dating back to the Mamluk era.

The Secret Behind The 4th pyramid In an Egyptian Mosque

You will stand while one of the most wonderful Islamic art designs surrounds you in the Al-Rifai Mosque. It includes a unique mix of European Christian architecture and the attractive Islamic style in the construction and decoration.

When we talk about the Islamic Art Designs in the mosques, we have to mention the 4th pyramid of Egypt. It is Sultan Hassan Mosque. There you can see a remarkable combination of the construction strength and its greatness, the leaf of decoration. You will amaze by its high dome, huge minarets, the greatness of its breadth, the grandeur, and the abundance of its decorations. 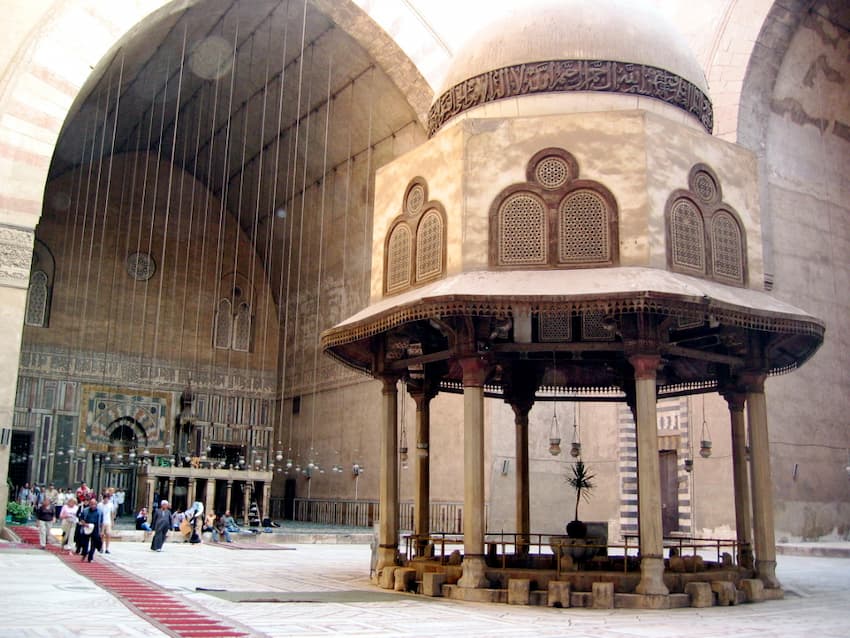 Be a witness of minarets that shook the sky’s hands from 1848 and the largest domes in Egypt in the Mosque of Muhammad Ali, this Alabaster Mosque was established in the period from 1830 to 1848 to include a unique design with valuable decorations.

Actually, you will be in confusion about where to begin your tour in this great mosque.

Aout The Islamic Art of The Castles in Egypt

The largest war castle in the Middle Ages that will reveal more secrets about Islamic Art in Architecture. There, you can share the army countering against the danger of the Fatimid state. It is the citadel of Saladin.

Travel to Alexandria to find a lot of these Islamic artifacts. Since the 14th century, the Alexandria Sea touches the strongest citadel on the Mediterranean coast. It is the Citadel of Qaitbay that includes the oldest mosque in Alex.

While Rosetta, Egypt is the Largest Museum Of early Islamic architecture. 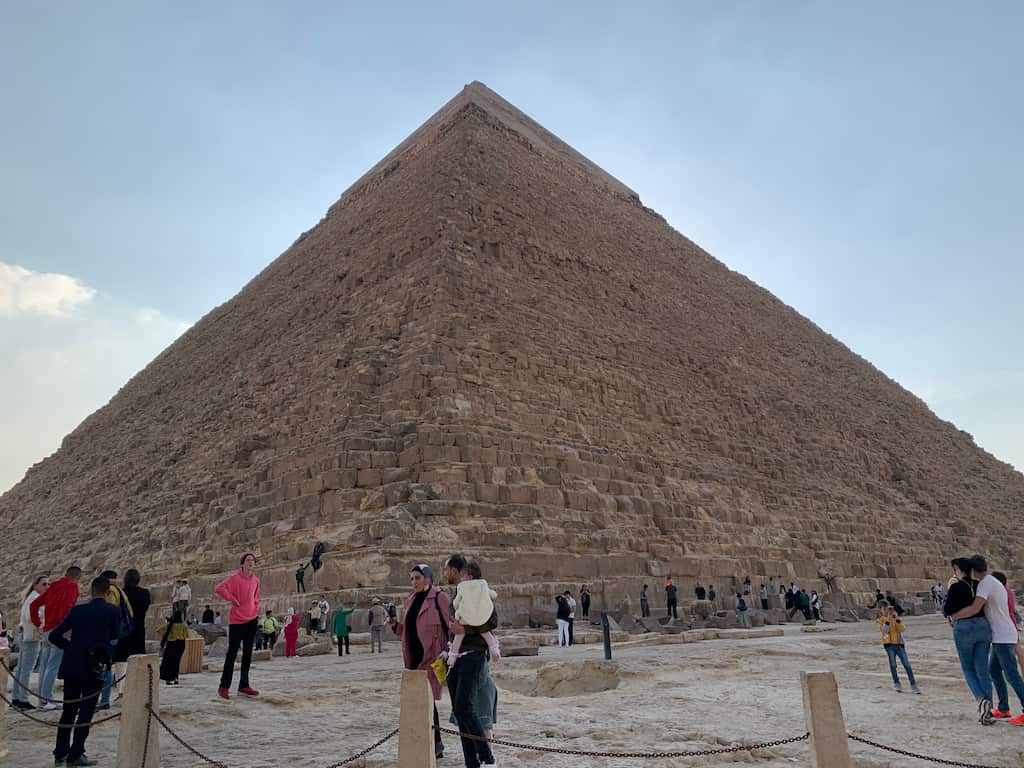 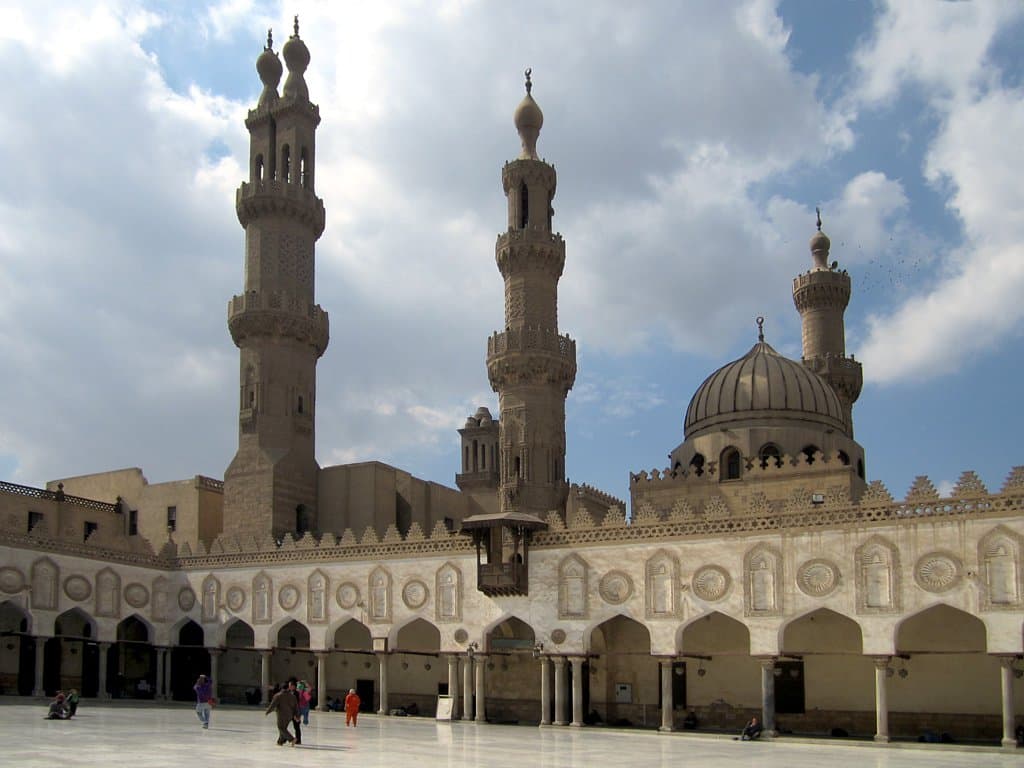