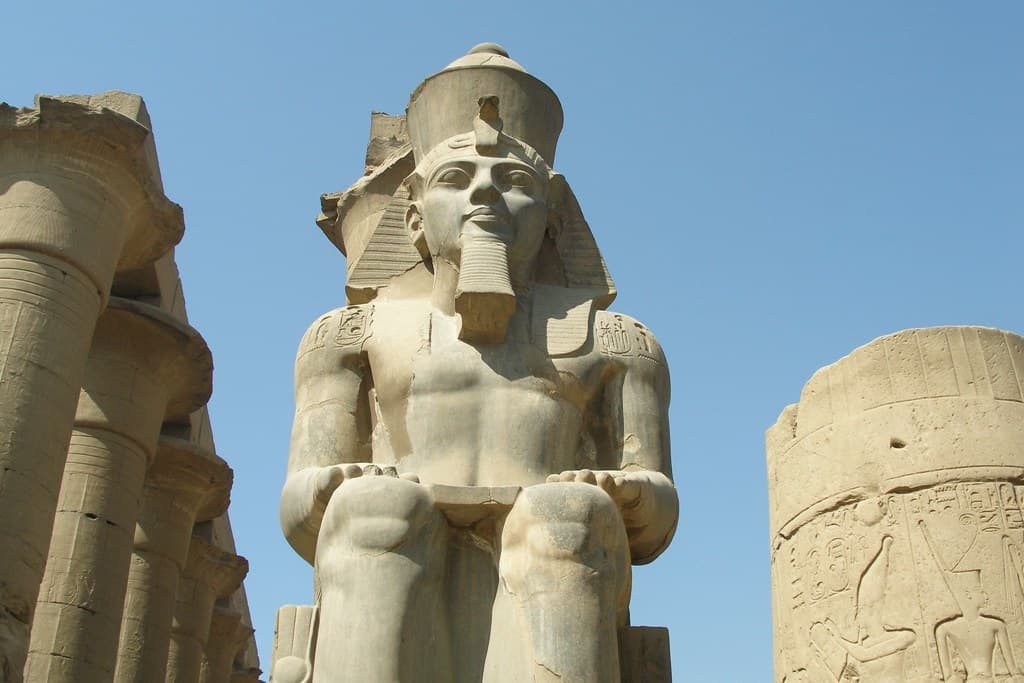 The 10 Best Things to do in Luxor Egypt

The 10 Best Things to do in Luxor, Egypt + 2-Day Itinerary

It’s no surprise that Luxor is renowned as the “world’s finest open-air museum,” with the magnificent and mystical Nile River passing through the heart of what was formerly known as Thebes, and old well-preserved temples strewn about. Let’s find the Best things to do in Luxor, Egypt.

Pharaohs constructed ornate tombs on the west bank of the Nile to get ready for their funerals and constructed temples on the east or the other bank of the Nile to commemorate their victories. In truth, archaeologists are currently trying to discover graves throughout the valley. People are now being moved in order for their homes to be destroyed and excavating to commence beneath them. Even major structures and mosques are being demolished in order for archaeologists to uncover the huge treasures buried underneath them.

To help you organize your trip, we’ve put up a selection of the top activities to do and see in Luxor, as well as a full 2-day itinerary. Be ready to have fun!

Preparing for Your Trip to Luxor, Egypt

Luxor, like the rest of Egypt, has a hot desert environment, however its summers can be hotter than those of other Egyptian towns. From June through August, average high temperatures are over 104°F, while average low temperatures are above 72°F. So, if you travel during the summer, be ready for scorching temperatures. Winters are milder, with temperatures ranging from 40 to 70 degrees Fahrenheit. Luxor’s main peak tourist season is in the wintertime, so anticipate congestion of tourists from all over the world.

What to Pack for Luxor

Luxor’s noon heat will be relentless during the summer months. Light, breathable clothing is recommended. Here are some of our favorite Egyptian summer clothes

In the winter, the sun sets earlier, and temperatures drop dramatically once it does. For evening outdoor outings, you’ll need a sweatshirt. Luxor has an estimated yearly rainfall of less than.04 inches, so you can forget your rain jacket at home. Here’s a list of anything and everything I brought with me to Egypt.

Getting to Luxor and Around Town

Luxor is located around 430 miles south of Cairo and the Giza Pyramids. Buses and trains run between Luxor and Cairo on a daily basis, including a stop at Giza. Luxor International Airport (LXR) is ideally placed, with direct flights to many important cities throughout the world.

Many visitors arrive in Luxor or leave from Luxor aboard a luxury cruise ship that travels up and down the Nile River to Aswan. Learn further about our top ships cruising the Nile River if you’ve not already scheduled a voyage

Make sure you have some little cash on you in case you get a “baksheesh.” On your daily trips, pay your vehicle, boat, and carriage drivers, as well as the hotel workers who take your luggage to your room. And getting (and keeping) little coins may be quite difficult.

At every temple and tomb, you’ll come across guards dressed in traditional garb. If you ask them to take your picture then it’s a tradtion to give them tipping; They might also as you to guide and educate you about the temple, or point you something you may otherwise overlook, and then want baksheesh in exchange. It’s a tradition and they got used to it! Please put in consideration that some of them rely on gratuities to take care of their families.

Definitely! Tourists and locals alike will find Luxor to be quite secure

All above hotels are Luxor’s premier luxury hotels on the Nile River’s east bank. Your arrival will be rewarded by a large, contemporary accommodation with a private balcony overlooking the stunning infinity pool and the Nile River. It will be tough to get out of bed and leave the resort every day with plush bedding, a walk-in shower, and all of the amenities you could desire!

Top Things to See and do in Luxor, Egypt

The Karnak Temple, with its 134 elaborately carved columns, is a beautiful and well-preserved temple. The entrance charge is 120 LE each person. Photography is a costless activity.

The Luxor Temple, which goes all the way back to 1392 BC, houses antiquities from five distinct cultures — Roman, Greek, Christian, Islamic, and ancient Egyptian – in one location. The entry charge is 100 LE each person. Photography is a cost free activity.

The graves of Rameses IV, Rameses III, and Rameses IX are the ones with the best-preserved hues. Rameses III’s mausoleum is not to be missed! Because the Saptah and Sety II tombs are less visited by tour groups, you’ll almost certainly have them to yourself (and the guard hoping to earn a baksheesh). The brilliantly coloured eagles painted on the ceilings are a must-see. The departure to the massive, intact sarcophagus at Merenptah tomb is the steepest. Around the entryway, don’t overlook the well-preserved, vivid sculptures.

You may see the graves of two distinct queens in the Valley of the Queens, which are much smaller and less ornate than their men counterparts. If you want to view the tomb of Nefertari, King Rameses’ favourite among his 34 wives, you’ll have to spend an extra 1,000 LE each person. The access charge is 80 LE each person.

The Egyptians who carved the tomb sculptures in the Valley of the Kings or Deir El Medina resided in a neighboring hamlet. They spent their free time in the Valley of the Workers, where they built beautiful tombs for themselves. Their tombs are considerably smaller, and the walls aren’t chiseled, but the vibrant murals are stunning! The entrance charge is 80 LE each person.

The Temple of Hatshepsut (Al-Deir Al-Bahari) was erected as a funerary temple for King Hatshepsut, who is known for being the first female pharaoh ever verified. A two-way tram ticket costs 2 LE per person, with an entrance fee of 80 LE per person.

The Colossi of Memnon is made up of two colossal sculptures carved from a single block of limestone. One is complete and original, while the other has undergone extensive restoration. Free admission.

8. Ride in a Hot Air Balloon

Every day, just before sunrise, hot air balloons soar to the sky, allowing passengers to witness the sky convert the temples on the Nile’s banks into lovely pastel colors. Balloons with a Magical Horizon Luxor’s safety record are flawless and exceptional, and its pilots are courteous and competent. They’ll take care of all the details so you can have a great experience!

Around 4:45 a.m., you’ll be picked up from your hotel and served coffee and a snack onboard the small plane. Watch how your balloon is inflated after boarding a boat that will transport you across the Nile. Your pilot will provide a brief overview of Luxor’s history while pointing out monuments along the route. It will take 45 minutes to an hour to complete the journey.

Luxor’s cuisine is amazing, and you must try some of the local delicacies! Here are a handful of our personal favorites:

Al-Sahaby Lane Restaurant — with great rooftop tables and a handy location just within the souq, this is a must-try when exploring Luxor! The mezze platter, moussaka, and Egyptian-style pizza are all worth trying.

El Hussein Restaurant is located just a few streets from the Hilton Luxor and serves well spiced meats with a range of side dishes.

Oum Hashim Restaurant – Oum Hashim is the greatest BBQ in the city for excellent grilled meat and chicken. Even if you don’t want to eat grilled meat, their moussaka and bada salad are delicious. Make sure you get the right one – there are two imitators in the area!

The Old Market Street souq in Luxor is the ideal place to pick up that Egyptian gift you’ve been currently looking for while on vacation in Egypt. Vibrant lamps, plastic pharaoh sculptures, alabaster stone vases, and gold jewelry are just a few examples of the various souvenirs available.

Anticipate to haggle for a price that is roughly half of what was initially offered. However, keep in mind that you’re simply negotiating over a few bucks, and they presumably require it much more than you.

Day One: Explore the West Bank of the Nile

You’ve got a full morning of temple-hopping ahead of you, so load up on the excellent breakfast buffet! The Valley of the Kings, which has been the location of royal tombs since about 2100 BC, will be your first destination of the day. It’s interesting to note that old Kingdom Egyptian rulers would start building their tombs on the same day they were declared king.

Because certain monarchs, such as Rameses III, ruled for such a long time, their graves are quite long and intricately carved and decorated. Others, like Rameses IX, did not live long lives and hence had to have their graves erected fast. When the monarch died, the workmen had 70 days to finish the tomb since the mummification process took that long.

The Al-Deir Al-Bahari Temple, which was erected by King (technically queen) Hatshepsut, the only verified feminine pharaoh, will be your next visit. She mentioned that the gods turned her into a man after her husband, who was also her half-brother, died, permitting her to govern as king.

All Egyptian sculptures show her as a male, and researchers didn’t realize she was a woman until the discovery of her lover’s tomb in the 1900s. Unfortunately, Thutmose III, Hatshepsut’s enraged stepson, destroyed all of the sculptures and carvings representing her at this temple.

Day Two: Explore the East Bank of the Nile

Nowadays you’ll see the most important temples on Luxor’s East Bank. The Karnak Temple will be your first destination, where you’ll see 134 well-preserved columns.

Many broken representations of King (Queen) Hatshepsut can be seen throughout the temple, since she made numerous gifts here in order for the priests to acknowledge her as a pharaoh.

The Luxor Temple and the Karnak Temple are connected by a sphinx road, and it is estimated that 6,000–7,000 sphinxes will be unearthed after excavations are completed. Many structures along this route were demolished to create room for the exploration tours, along with a 200-year-old mosque.

Your day of tours will come to a close at the Luxor Temple, in which you can see traces of five distinct cultures – Roman, Greek, Christian, Islamic, and ancient Egyptian – all in one spot.

On your walk in, you’ll pass through Egypt’s oldest mosque, and it was via the construction of that mosque that the Luxor Temple was found – it had been hidden under the city streets for almost 1,000 years! Observe the door on the mosque that is around 30 feet high – that used to be the temple’s entryway! That should offer a sense of how deeply sunken this temple was.

The impact of various civilizations on Egypt across the history is shown in a headless Greek sculpture and paintings on the temple walls where Romans sought to replace the ancient Egyptian sculptures with their very own religious images during their reign.

Finally, return to your hotel and relax by the pool while sipping a delicious beverage. It’s been a long two days of studying about this magnificent city’s old history and remains!